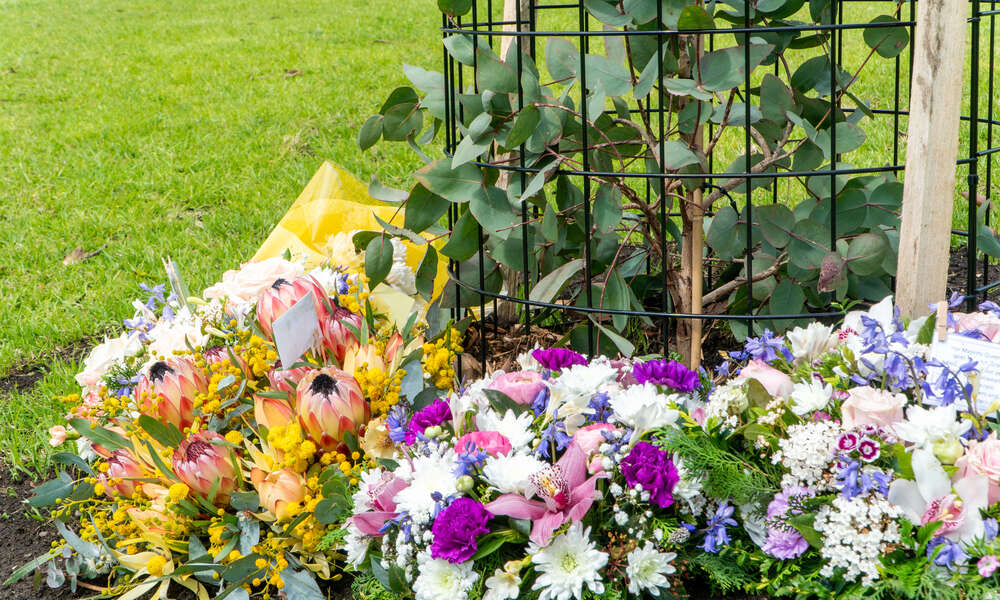 City of Mount Gambier Mayor Lynette Martin OAM was joined today at Elizabeth Knight Reserve by Mr Tony Pasin, Member for Barker and Travis Fatchen on behalf of Mr Troy Bell, Member for Mount Gambier, and other dignitaries to lay a wreath to celebrate the life of Her Majesty Queen Elizabeth II following her passing on 8 September 2022.

The City of Mount Gambier chose the site where students from Reidy Park Primary School recently planted a canopy of trees to celebrate the Queen’s Platinum Jubilee to commemorate her passing and her enormous contribution to society.

Queen Elizabeth II was Patron of The Returned & Services League of Australia and Mount Gambier Community RSL President Robert Sandow laid a wreath in memory of The Queen.

Members of the public are invited to lay their floral tributes to Queen Elizabeth II at the site until Monday 26 September. The Royal Family have noted that instead of leaving floral tributes, Australians may wish to consider making a donation to a charity of their choice.

Lynette Martin, Mayor of Mount Gambier, said at the ceremony that Queen Elizabeth II has a special place in the hearts of Mount Gambier residents, especially those who remember her visit in February 1954.

“As Mayor of the City of Mount Gambier, it is important that as a city we acknowledge the passing of Queen Elizabeth II and to provide a place where our residents can place floral tributes to honour her passing,” Mayor Martin said.

“We give thanks for an extraordinary life and for a lifetime of service to the Crown and as Queen of Australia and her other realms and territories, Head of the Commonwealth.”
Mayor of Mount Gambier Mrs Lynette Martin OAM

The Queen will forever be a part of the city’s history and heritage, and we will continue to share any formal arrangements to celebrate her incredible life and service.