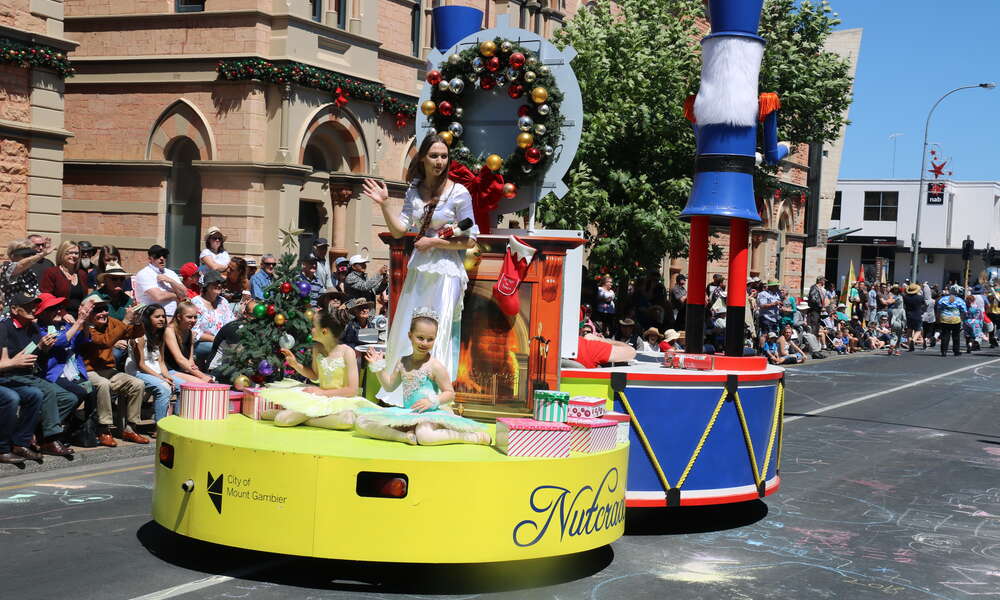 Entries are now open for the 2019 NF McDonnell and Sons Mount Gambier Christmas Parade. This year’s event will be held on Saturday 16 November and is celebrating 60 years since the first parade was held in the City in 1959.

With more than $3,500 in prize money to be won the City of Mount Gambier is encouraging all community groups, sporting clubs, schools, businesses and individuals to fill in an entry form and get behind the festive event.

We would love to see a fabulous and exciting array of entrants to celebrate this special milestone in the history of the parade so put your thinking caps on and come up with a great idea or perhaps recreate a float from many years ago to signify the occasion,
- City of Mount Gambier Mayor Lynette Martin OAM

“It’s always a fabulous day with children and their families lining the streets to mark the beginning of the festive season in Mount Gambier.”

There are 10 prize categories with the top prize of $750 awarded to the most outstanding entry. Other categories include best Christmas theme, best school entry, best club or community organisation entry, open category, best brass band, best themed band, encouragement award, best non-city entry and an award for best use of recycled resources, sponsored by Community Action for Sustainability.

“We are very grateful to all award sponsors for making this prize money available to entrants and of course major sponsor NF McDonnell and Sons for their ongoing support of the Mount Gambier Christmas Parade,” Mayor Martin said.

All entries will be independently judged on criteria such as creativity, effort, visual appeal, energy, crowd engagement and creative use of recycled material.

“There is no cost to enter and all participants have such a great time so enter as an individual, club or get a group of friends together and be part of this iconic event,” City of Mount Gambier Team Leader Community Events Denise Richardson said.

To commemorate the 60th year a number of additional attractions have been arranged for the 2019 event.

“We have a surprise instore for families and children with entertainment and roving performers on Commercial Street from 10:30am before the parade starts,” Mrs Richardson said.

“The entertainment and roving performers will then make an appearance after the parade in the Cave Garden for Party in the Park.”

Christmas Parade photos from 1959 to 2018 are being put together by the Mount Gambier History Group, Library and Illuminart to form a projection light show in the Cave Garden.

“If members of the public have any great photos or old films of the parade we would love for you to take them into the Library so they can be copied, archived and used in the projection,” Mrs Richardson said.

Entry forms can be downloaded here or a printed copy can be collected from the Mount Gambier Visitor Centre, Mount Gambier Library, Civic Centre or The Riddoch and Main Corner Complex.