2023 Australia Day Breakfast and Citizen of the Year Awards 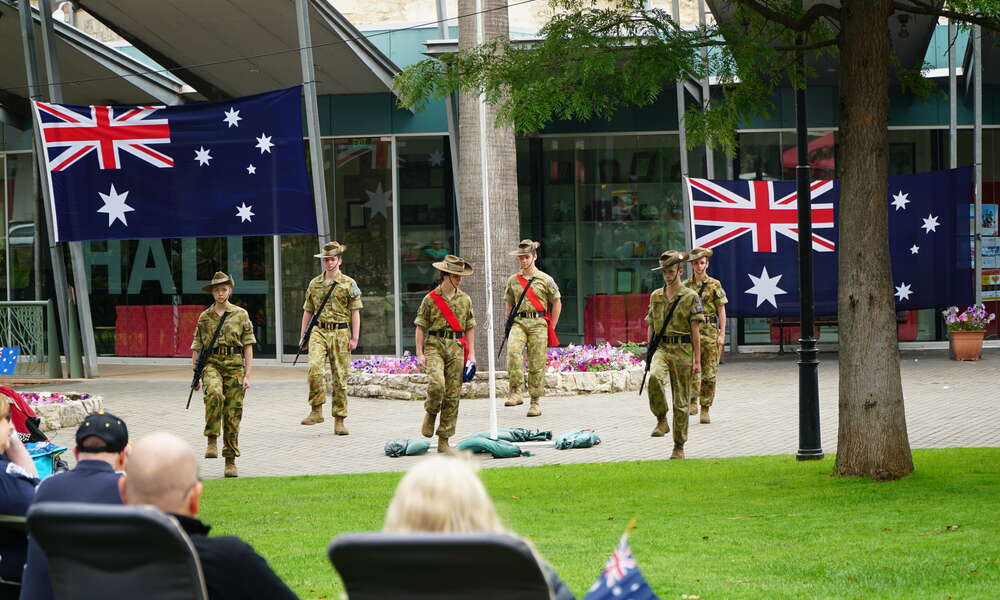 The City of Mount Gambier is pleased to announce the 2023 Australia Day Breakfast and Citizen of the Year Awards.

The Australia Day Breakfast will be held in Mount Gambier’s Cave Garden/Thugi from 7:30am on Australia Day, 26 January 2023.

The Lakes Rotary Club of Mount Gambier is cooking breakfast until 9:00am, with all funds raised from the breakfast donated to SAPOL’s ‘Law Enforcement Torch Run’.

Attendees will be entertained with live music performances by:

For the first time at the Australia Day Breakfast in Mount Gambier, the event will be interpreted on stage in Auslan - the language of the Australian Deaf Community. In addition, accessible matting will be laid on the lawn, allowing better wheelchair access for attendees.

Formal proceedings include the singing of the Australian National Anthem, a flag-raising ceremony by the 48th Army Cadet Unit, and the Citizen of the Year Award presentation by the Mayor of Mount Gambier Lynette Martin OAM.

For those unable to attend the event, the City of Mount Gambier is live-streaming the proceedings, which can be viewed at facebook.com/cityofmountgambier

The 2023 Citizen of the Year Awards celebrates the achievements and contributions of outstanding members of our community. The City of Mount Gambier received many worthy nominations for this year’s awards and is proud to advise of the following recipients:

“So many residents in the Mount Gambier community show community support and spirit, and it is a real delight to acknowledge their efforts to give back to the community as part of the Citizen of the Year Awards,” City of Mount Gambier Mayor Lynette Martin said.

The recipients of the 2023 awards, along with all of those nominated, contribute to the advancement and well-being of our community in Mount Gambier, and the whole city should be proud of their achievement. City of Mount Gambier Mayor Lynette Martin

Young Citizen of the Year: Zane Serdarovic
Zane is the President of Mount Gambier’s Riding for the Disabled Centre and does incredible work day in and day out with the centre’s members. Zane has done a fantastic job in providing the best possible service he can to the RDA clients and strives for change. Recently Zane organised an awards night for the centre with medals and certificates as a way for everyone to feel valued and appreciated.

Zane makes every person who walks into the centre feel welcome, and when asked why he volunteers, Zane said, “the kids, their smiles and how much they love it, it honestly just makes it worth it every time.”

Citizen of the Year: Graham Carter OAM
Graham’s long journey of community contribution has focussed on humanitarian service and building better communities for the benefit of all.

Graham is a remarkable member of our community who has contributed distinguished service of the highest order in civic, agricultural, emergency services and community service organisations. His wise, calm, facilitating approach, combined with great inner strength and seemingly endless capacity for work, has made an outstanding contribution to the many voluntary and business organisations with which he has been associated for over 60 years.

Senior Citizen of the Year: Allen Woodham OAM
Allen has contributed to the life and advancement of Mount Gambier for many decades. He has worked with the Salvation Army, Mount Gambier City Band, Lions Club, Local Brass Band, and Christmas Parade Advisory Group.

Community Event of the Year: Fantasy Medieval Festival
The inaugural Fantasy Medieval Festival was awarded Community Event of the Year for creating a fantastic community atmosphere, with plenty on offer for the whole family. A dedicated team of volunteers ran the festival, which generated significant visitation to Mount Gambier, a terrific accomplishment in its first year.

Along with the music the band provides to the city, the Blue Lake Highland Pipe Band provides tuition and instruments free of charge to community members, introducing young people to the Pipe band fraternity.