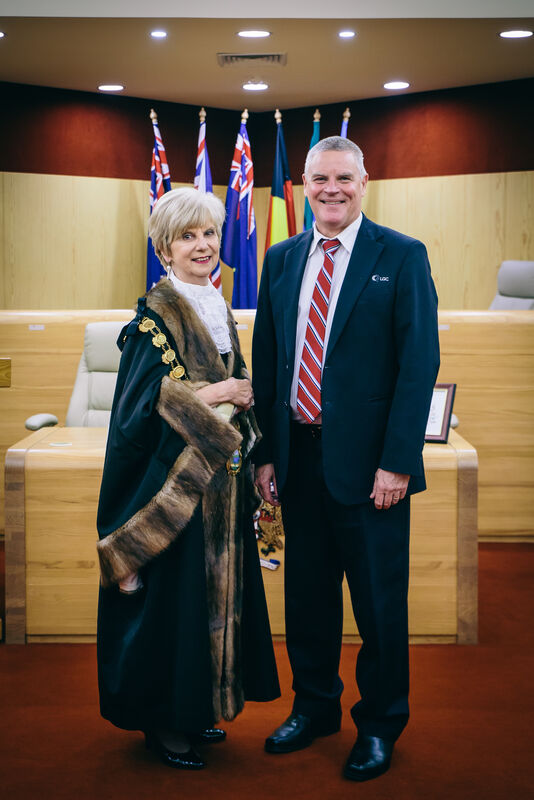 City of Mount Gambier CEO Mark McShane will officially retire on Friday 15 February 2019 after more than seven years in the top job at Council and an extensive career in local government, training, recruitment and human resources.

Mark was born in Adelaide in 1956 where he spent his childhood, before moving to Perth with his family in the mid-1960s for the duration of his teenage years. He returned to South Australia to complete a Bachelor of Education at Adelaide Teachers College and started his working life as a secondary teacher in 1979.

“I was reasonably good at school, had some excellent teachers and I thought it would be a solid profession. I cut my teaching teeth in Whyalla for three years and because I was a male teacher I normally got lumbered with the Year 9 boys class with 35 or 40 kids,” he said.

Mark then returned to Adelaide and continued to teach for three years, before he acquired a teaching advisory role based at Murray Bridge where he worked with schools and teachers for the next four years to improve systems and processes.

“It was predominantly implementing new curriculum, new assessment methods and school change programs, a bit like an organisational review in schools,” he said.

Uncertain about where the advisory position would lead, in 1989 Mark made the move to the private sector as a consultant at Kimberly Clark's Millicent Mill, known then as APCEL.

“I joined the company at an interesting time with a real focus on restructuring industrial awards and the implementation of training systems embedded within the awards, it was really quite a monumental shift in terms of how things were done. Prior to that, a lot of progression in the trades and industry was through the years in the job as opposed to skills.”

“Part of my role was to develop the training systems and structures for the organisation at Millicent. So I ended up running a whole range of training programs and setting up the training process over a two year period.”

With innovation, improvement and training on his mind, Mark recognised that he would need to go back to university and studied remotely while living on a small property in Worrolong outside of Mount Gambier.

“I found the job a fairly good fit, but my education degree wasn’t necessarily highly regarded outside of education, so I chose to do another degree in business education and I started that remotely through the University of South Australia.”

In 1990 Mark moved back to Adelaide to begin his career in local government, appointed as the first Human Resources Manager for the City of Enfield Council.

“The HR there was coming from a fairly low base in terms of systems and processes, so it was great to be able to get in and put the foundations down for solid and modern human resource management.”

Following an organisational restructure in 1995, Mark moved on to the role of Director of Corporate Services encompassing traditional corporate services, records management, IT and finance, while still maintaining HR as part of his portfolio.

The amalgamation between Port Adelaide and Enfield Councils followed in 1996, which Mark described as a monumental period in his career.

“I also had responsibility for the facilities and buildings at that stage and the Port Adelaide Council Chambers and Civic Precinct had to be completely refurbished at a cost of $12 million,” he said.

While managing the amalgamation Mark was also studying a Masters degree in HR, lecturing at a private consultancy firm in Adelaide and welcomed his first child Alex into the world.

“It was a very busy time looking back. The Civic Precinct still looks good today and some of those initiatives like the one stop shop and customer service counter were ahead of their time. Those things I feel pretty proud of, and we got through it without any major industrial disputation.”

Mark’s work life ran smoothly following the amalgamation, but his travel loving family sought change. Mark and his former wife had often visualised living overseas, so in July 1999 they packed up their belongings and moved to China with their daughter who was just six years old at the time.

“I hadn’t been to China before, but it seemed like a good idea at the time. I had no job to go to, but I’d made some connections and contacts before leaving Adelaide and one of those came off. Again, this was in HR as a deputy CEO of a training organisation in Beijing servicing large multinational clients operating out of China.”

Mark embraced the move from local government into a new organisation in a new city, country and culture, and worked almost exclusively with professional Chinese people who spoke two or three different languages.

“I ended up teaching university level students, for whom English was their second language, HR and industrial relations modules for their university course as part of my work.”

“HR in China back then was a very new concept and things like performance reviews and appraisals were all fairly new territory for many of these organisations. Culturally, it was extremely different from Australia and the west in terms of providing feedback to employees.”

A year and a half later Mark moved on to work at a global executive recruitment firm with 30 offices around the world, including four in China.

“I ended up managing the Beijing office with a number of staff and conducting executive recruitment and executive search for multinational companies including Kraft, IBM, Thyssenkrupp and Coca Cola. We had four offices in China so it was nothing for me to jump on a plane and fly to Hong Kong for a day.”

Mark lived in Beijing for three years before returning to Sydney in 2002 to work for a national local government consulting firm. He spent four years in Sydney recruiting CEOs, senior and specialist staff in New South Wales, Queensland, Victoria and South Australia.

During this time Mark remarried and he and his wife Xiaorong welcomed daughter Ella to the family in 2005. While they enjoyed living in Sydney, the family sought improved lifestyle options and decided to make the move back to Adelaide in 2006 when a job came up at Port Adelaide Enfield Council once again. This time Mark took on the role as Director of Community Development.

“I was in this role for around four years and it was really interesting and probably a little bit outside my comfort zone. I had 150 staff, five libraries all with community development activities, home and community care, youth, arts and all the contacts with sporting and Indigenous groups, it was a good learning curve for me.”

“I then took over the corporate services role once again, so I was back to where I started. I enjoyed getting back to the corporate, we had staffing levels of around 500 with a $120 million budget. I spent two years in the role and then thought, ‘where to next?’”

In 2011 the former long standing City of Mount Gambier CEO Greg Muller retired and his position was up for grabs. Mark decided to throw his hat in the ring and got the job.

“It was now or never and I think I’m a pretty good example of the notion that if you want career advancement you need to be willing to shift and so I did once again.”

Council has completed several successful projects under Mark’s guidance including the CBD upgrade, the Railway Lands, the ReUse Market, the demolition of the former hospital and the Rail Trail.

“We also assumed responsibility of the Riddoch which was a large piece of work and we managed to secure James Morrison Academy here and what went on in the background to make that happen was huge.”

The latest and largest achievement for Council was securing $25 million in State and Federal funds for the proposed $39.1 million Mount Gambier Sport and Recreation Hub.

“People keep on asking me why aren’t you staying to see that built, but I’m leaving on a high. Securing $25 million worth of grants is a good way for me to exit the organisation, somebody else can then take the reins and make sure that the hub gets built on time, on budget and on spec to be open late 2021.”

While Mark is proud of the work undertaken to deliver Council’s physical projects during his tenure, it’s the relationships with staff that are most important to him.

The key thing that we’ve tried to do here is to make sure that we’ve got highly skilled professional people.
- CEO Mark McShane

"The real reason why you stay in an organisation is the quality of people that you work with and when you put in 60 hours plus a week, you want to make sure the people around you are highly professional and fun to work with. I’ve been fortunate in having exactly that in this organisation.”

Mount Gambier Mayor Lynette Martin commended the outgoing CEO for his work for Council and the community over the years.

Through his strong leadership, guidance and management of Council affairs, the City of Mount Gambier has progressed on all fronts. Mark’s knowledge and advice is outstanding across a broad range of community issues and topics and I’ve particularly appreciated his mentorship since becoming Mayor late last year.
- City Mayor Lynette Martin OAM

“He leaves us in a very solid financial position and he will certainly be missed.”

Mark made the decision to retire last year after seeing friends suffer through chronic illnesses and decided to reassess his personal priorities moving forward.

“I haven’t stopped, it has been successive decades of quite challenging and demanding jobs. So that was my reason for saying it’s time.”

“It really is a great job, it’s a great organisation but ultimately you’ve got to make the call and I had to consider what I’m going to do for the rest of my life. When you’re working all the time often it can be too late, then you haven’t got the health that you want to be able to do the things that you have always planned for in retirement.”

Mark will now find the time to slow down a little to enjoy travel, fishing and the gym.

“My family will stay here this year, I’ll slip quietly into some relaxation and a bit more gym work, I’ve got jobs to do around the house that haven’t been touched for several years and some travel plans have been made and flights booked in April and September.”