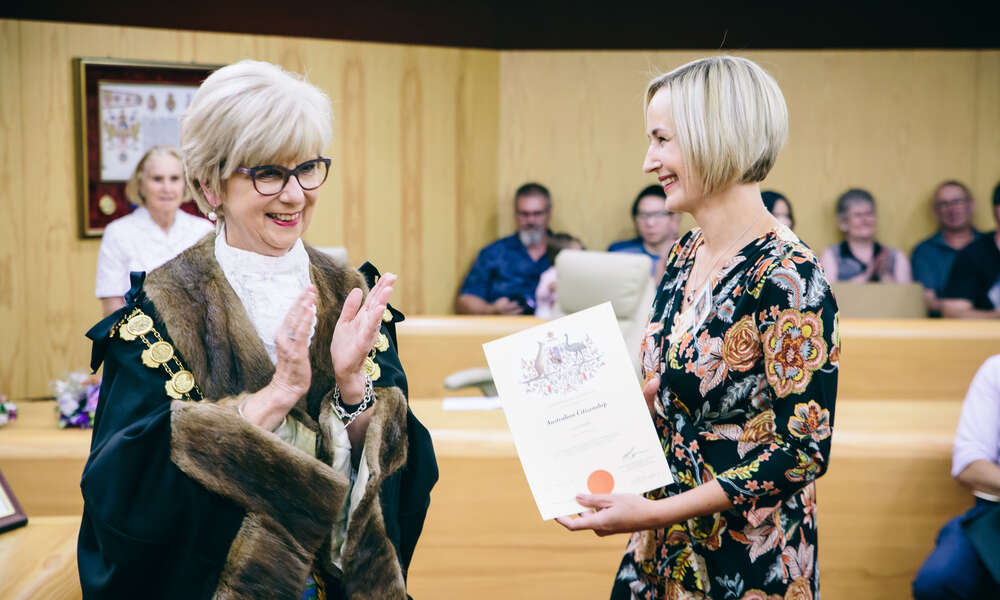 Five members of the Mount Gambier community were granted Australian citizenship following a citizenship ceremony officiated by the City of Mount Gambier on Thursday 7 February 2019 at the Council chambers. Mayor Lynette Martin OAM presided over the ceremony where the candidates, surrounded by family and friends, pledged their loyalty and commitment to Australia through the citizenship pledge.

Soroptimist Mount Gambier were also in attendance continuing their tradition of presenting candidates with a gift to welcome them as new Australian citizens and the ceremony concluded with the singing of the Australian National Anthem performed by Chanceline Kakule and Amy Grouse.

New citizen Andrew Harvey arrived in Australia four and half years ago from the United Kingdom and has resided in Mount Gambier for the past 12 months. Reflecting on the ceremony, Andrew described the occasion as dignified and as solemn as it should be.

Conferring citizenship on someone is the greatest gift a nation can offer and I feel very humbled to receive it. It was a huge honour to receive my citizenship, Australia has made me feel welcome and I always felt I should make a full commitment to this amazing country.
- New Australian citizen Mr Andrew Harvey

"I feel immensely proud to now call myself Australian and I look forward to spending the rest of my life here."

Mrs Corne Ryan originally from South Africa is a local phlebotomist who has resided in Australia for the past ten years. Mrs Ryan recognises being granted citizenship as the opportunity to have a voice and contribute in the country she now calls home.

"The ceremony was beautifully done, I was very emotional and proud at the same time. We are very lucky to live in Mount Gambier, a place full of love and opportunities," Mrs Ryan said.