City of Mount Gambier continues its work in the waste and recycling space with the launch of a competition encouraging residents to paint their recycling bins. Created in response to the popularity of bin outings during COVID-19, the competition enables residents to express creativity while highlighting the importance of recycling.

“The Australian wheelie bin has become an icon as people in isolation have taken to dressing up in costumes in order to take their bin out, with the Bin Isolation outing group on Facebook now attracting a worldwide following of more than 1 million people,” Riddoch & Main Corner Coordinator Talie Teakle said.

“At the Riddoch we took this idea a step further and thought it would be fun to dress the bin up instead, developing a video tutorial as part of the online 'Riddoch at home' program.”

Residents are invited to paint the bottom half of their blue recycling bin to either identify their street number, or to promote the types of materials that can be recycled.

Council has ramped up waste and recycling initiatives around the city with the recent introduction of a bulky waste trial, suspension of FOGO fees and a waste survey which will help to inform an upcoming education campaign, so to complement that we came up with the idea to offer a competition for dressing up your recycling bin.
- Riddoch & Main Corner Coordinator Talie Teakle

“Not only does it encourage people to learn about the items going into recycling, but it will also add a lot of colour and individuality to bin day in your street”, Ms Teakle said.

Entrants can submit their artwork under two categories:

To enter email a photo of your completed bin along with your contact details to riddoch@mountgambier.sa.gov.au

A first and second prize will be awarded for each category. 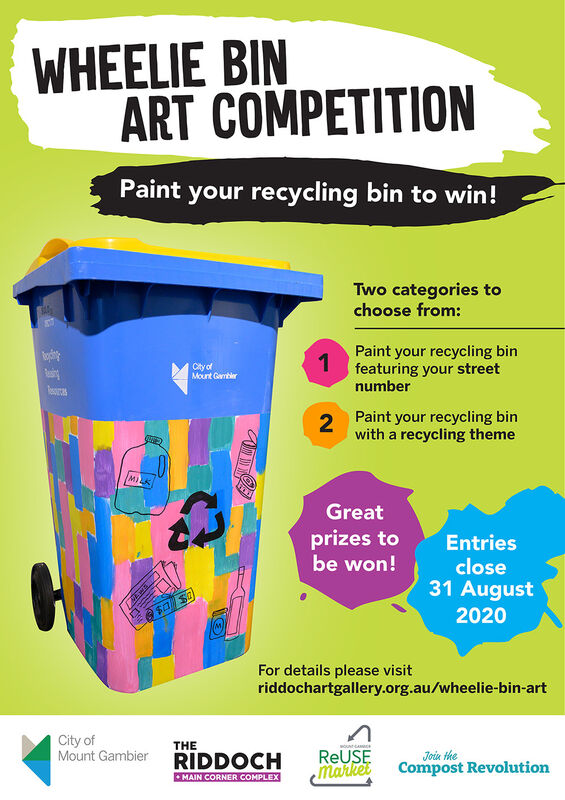