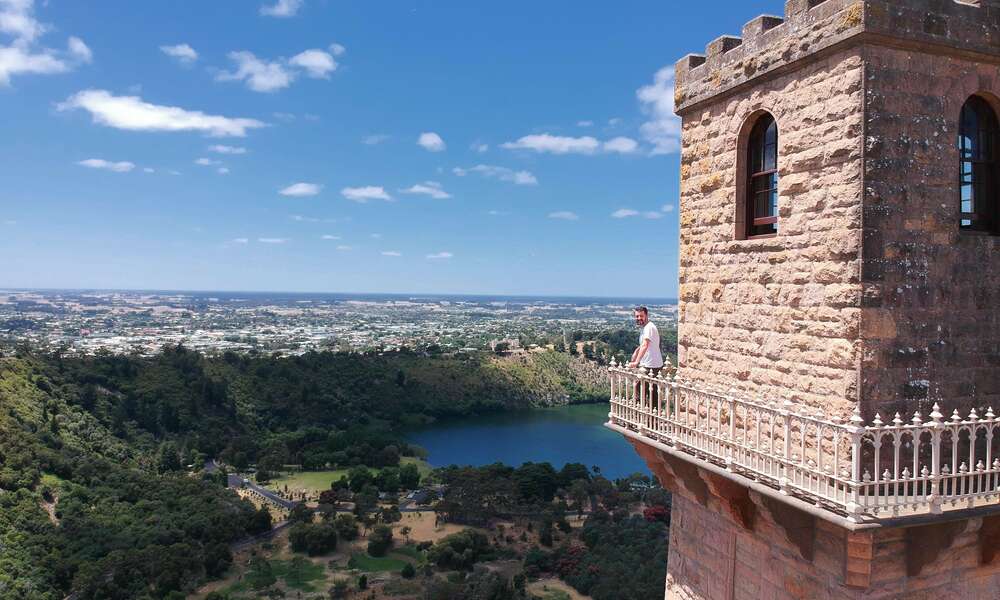 The City of Mount Gambier flag will fly over the iconic Centenary Tower once again on Australia Day and on the weekend (weather permitting) as a new caretaker re-opens the historic building and tourism hot spot.

Centenary Tower was first opened in 1904, but was closed to the public in recent years as the City of Mount Gambier struggled to find a suitable person interested in fulfilling the caretaker role.

Adelaide born Mobile Travel Agent Ben Deering and new Mount Gambier resident has been appointed caretaker for the next six months on a trial basis after initially being intrigued by the building for more than a decade when visiting the city regularly with family.

“My wife Tanya is originally from Mount Gambier and while visiting, I wondered why we hadn’t been able to look in the tower. Everyone told me that when the flag is flying you could go up there, and I said, when is that? Who has a key to the Tower?” Mr Deering said.

Now that he has the key and is living locally, he’ll use his extensive experience in the tourism industry to rejuvenate the popular tourist spot.

“We have found the flag and weather permitting, we’ll be open three days a week and at least one day on the weekends. We’ll keep the entry fee cheap at $2.00, provide refreshments and ice creams and we’ll look at implementing a pass type set up for locals who’d like to visit regularly.”

Mr Deering sees the historic building with fresh eyes and plans to make the most of the beautiful surrounding view by promoting the area to locals and tourists on social media.

“It comes back to perspective, you get blind to it when you have something this pretty on your doorstep and all it takes is visiting the tower and you think, this is pretty cool.”

“I’ve got a drone, so we’ll look at providing aerial portrait photos of people on the balcony at the tower as souvenirs. You used to buy a tea towel, or a pin, but now you get a photo or a selfie for Instagram and Facebook and tag it to share with others,” he said.

Centenary Tower is located 190 metres above sea level and provides the best views of the city, countryside and the volcanic landscape.

“On a clear day, you can see as far as 35 kilometres with a 360 degree view. You can see the Blue Lake, all the way down to Port MacDonnell and the view of farm land goes on for miles. There’s not much that makes people stop to take something in, but these views do.”

“Council staff have done a phenomenal job with the maintenance and getting the tower up to scratch for opening day, I’m very appreciative of their help,” he said.

“It’s a great time, everyone wants Mount Gambier to take it up a notch and we all care about our city and showcasing it at its best.”