The Cave Garden and surrounding venues are set to come alive next weekend as the Fringe in Mount Gambier program heats up on Friday 24 and Saturday 25 March. A huge array of local and interstate talent forms part of the festival that has been curated by local musician Louise Adams, local artist Mark de Nys and internationally renowned choreographer Lewis Major.

The Fringe Lift-Off Street Party will kick off from 4:00pm on Friday with activities spread around the Cave Garden, Watson Terrace and Commercial Street East. The street party includes a variety of food and entertainment including live music, roving performers, card readings, henna tattoos and face painting as well as the involvement of local traders spilling out onto the footpath and Commercial Street where a road closure will be in place.

Metro Bakery is hosting a Get me to the Greek party, while Presto will take on a Mexican theme with their Tacos and ‘Tini’s event. A polish theme at Copenhagen Ice Creamery and Dessert Bar will include danish hotdogs, beer and waffles, while Jen’s Hotel will host musician Ben Hood on the balcony with the Caddy Shack bar and amusements.  A tiki bar installation, the Aloha! Tiki Bar is also set to attract a crowd with its hawaiian theme. The Main Corner and Riddoch Art Gallery will also be a hive of activity with the opening of three exhibitions and an installation in the Cave Garden.

The community is encouraged to join in with the Fringe spirit by taking part in the ‘pied piper’ event.  Costumes will be supplied and the procession will depart from the Cave Garden fountain at 6:00pm and will weave through surrounding streets with everyone welcome to join in along the way.

The Festival continues on Saturday with the Fringe Showcase event. The main stage will feature entertainment curated by Louise Adams as part of the grassroots arts initiative titled ‘Send me to Fringe’.

“I’ve had many years of involvement with the Adelaide Fringe and as the official ambassador of the Fringe in Mount Gambier, I’m very excited to see such a great program take off regionally,” Ms Adams said.

The stage will feature a range of entertainment from music, dance, visual art and comedy.

“I’m just really passionate about creating pathways and supporting the development of regional artists of all genres in the creation of a Fringe show,” she said.

‘Out of the Box’ will also feature on Saturday, an art installation of cardboard collaborations curated by Mark de Nys including local artists Mel Cecotti, Hamish, Jeremy Levins, Kyra Sykes and Daniel Kane.

“This is a great opportunity to work alongside an established contemporary artist as part of this interactive experience. All ages and abilities are encouraged to participate so come along and be prepared to get messy with paint-appropriate clothing,” said Mr de Nys.

Internationally lauded choreographer Lewis Major, now based in Millicent will deliver two dance performances, ‘Trolleys’ and ‘Losers’. The South Australian premiere of the award-winning ‘Trolleys’ is a family-friendly physical work utilising five supermarket trolleys.  ‘Losers’ is a short fifteen minute piece premiering at the Mount Gambier Fringe.  It is a free outdoor water ballet performance, with the involvement of local community participants.

Straight from the Adelaide Fringe, Cirque Nocturne will also feature on the main stage at Saturday’s Showcase event and will run a number of children’s workshops at City Hall between 11:00am and 2:00pm.

“After Hours Cabaret Club and Madhouse Circus are just some of the many free acts available to see with plenty more entertainment including an extended Farmer’s Market, Vintage Fair, Silent Bell installation in the Cave and other roving performers,” Ms Adams said.

‘Oedipus Schmoedipus’ is showing at the Sir Robert Helpmann Theatre on Saturday evening and will feature a new cast of 25 locals for the performance.

Fringe in Mount Gambier runs until 2 April 2018. For a full list of events, visit www.facebook.com/fringe5290 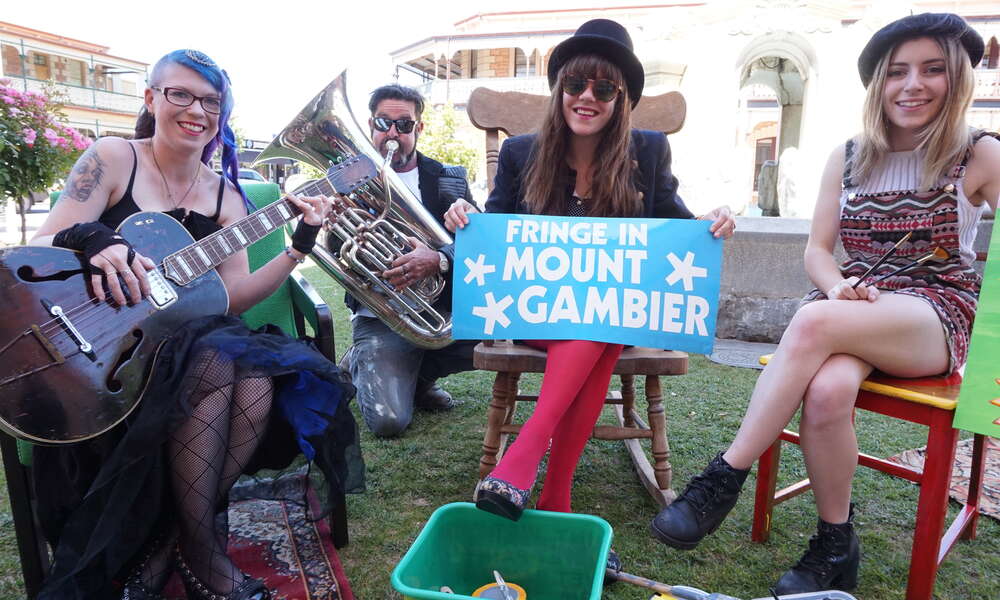