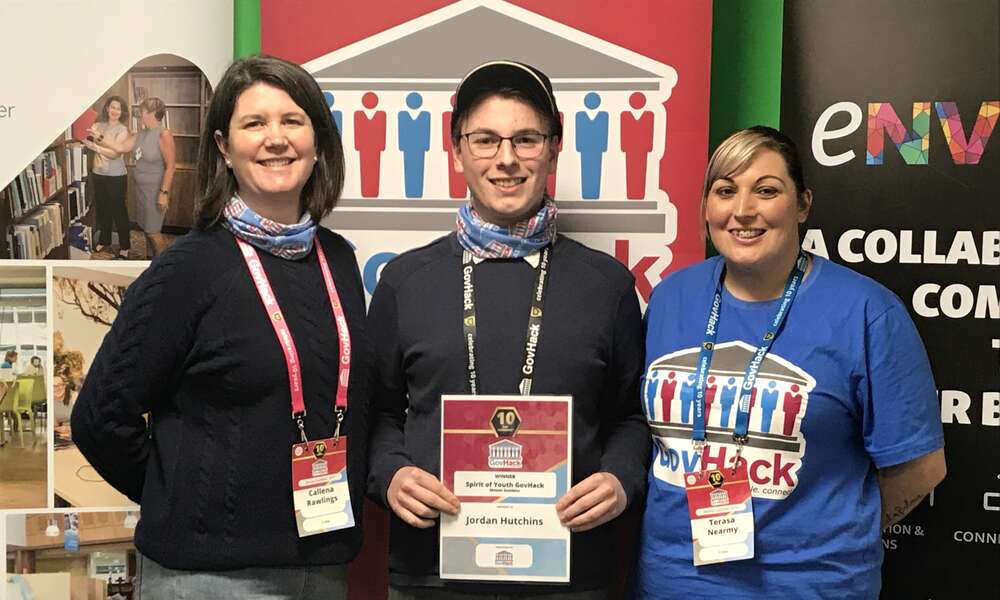 The inaugural partnership between the Mount Gambier Library and eNVIsion Limestone Coast for the GovHack Open Data Competition has come to a successful finish with 17 year old Jordan Hutchins taking out four awards.

The Mount Gambier competitor won the local, state, national and international Spirit of GovHack awards in a first for the region at the National Red Carpet Awards held in Canberra on Saturday 9 November 2019.

"Jordan is a very deserving winner who demonstrated leadership, a collegiate approach and an entrepreneurial mindset,” Ms Rawlings said.

“Across the weekend Jordan was a fantastic ambassador for Mount Gambier High School and is an example of the quality students that the school is producing.”

“We are looking forward to partnering with the Mount Gambier Library again for next year’s event in the hope that we can have more regional competitors achieve similar success.”

Jordan’s prizes from the Red Carpet Awards included a monetary prize, a certificate of recognition, a medallion and a trophy.

“GovHack has such a warm and inviting environment so the experience of the competition is just as good as winning, and I really wasn't expecting to go as far as I did,” Jordan said.

"The trip to Canberra was amazing and it was awesome to see so many other teams with their ideas of how open data could be used.”

“The atmosphere at the Red Carpet Awards was that of creativity and entrepreneurship and I've never seen so many people excited about using open data to create a more sustainable and enjoyable future."

Mount Gambier had further success at the Red Carpet Awards with team ‘Elly and Lilli’ receiving an honourable mention in the youth prize category for their project ‘Once upon a crime’.

Mount Gambier Library Youth Services Coordinator and local GovHack host Terasa Nearmy was pleased to learn of the success of the participants.

“It's just wonderful to see Mount Gambier being so successful each year. It not only celebrates the participant’s achievements but also provides them with encouragement and helps to attract future hackers to the event,” Ms Nearmy said.

The Red Carpet Awards officially closed the GovHack Open Data Competition for 2019 across Australia and New Zealand. The projects submitted this year are available for viewing at www.govhack.org