City of Mount Gambier Mayor Andrew Lee has moved to respond to commentary about the cost of a survey for the proposed Mount Gambier Regional Sport and Recreation Centre and how it should be administered throughout the community.

At a meeting this week, Council resolved the timing for an elector survey on the proposed facility after the Local Government Elections in November.

“This proposal is the largest single infrastructure project in the city’s history and it has always been Council’s intention to conduct an extensive engagement process to identify the level of support or otherwise, once all the facts and costings are available to ensure the community is able to make an informed decision,” Mayor Lee said.

The survey will be distributed to 19,270 people on the Electoral Roll which includes both ratepayers and non-ratepayers.

To do this independently, Council endorsed an estimated budget of $65,000 from the 2018/19 forecast operating surplus to engage external specialist support to conduct the survey.

“Council must gauge community opinion through a formal and credible process. It’s not as simple as asking a question or conducting a poll on a social media website like Facebook which anyone could respond to, or even using an email program like Survey Monkey which also has limitations as not all electors have an email address,” Mayor Andrew Lee said.

“We are also unable to conduct the survey as part of the November Local Government Elections run by the Electoral Commission as the notices have already been issued. Council is currently developing plans, documentation and analysis on the project and therefore did not have the information available in time for Electoral Commission lead times.”

The survey will be mailed out individually to every elector’s home address.

The cost estimate of $65,000 includes the design, the need to include barcoding on each survey to track authenticity, postage costs and then provision for responses to be scanned, comments analysed and for the report to be written.- Mayor Andrew Lee

The Mayor said it was vital to engage a professional company to administer the survey to ensure the community can be satisfied that the process was independent when the results are collated and released.

“It’s important that community feedback is sought by an independent expert in data collection to ensure the professional integrity of the information.”

Consistent with Council’s caretaker policy, the survey will be conducted after the Local Government Elections when Council is no longer restricted by the caretaker period.

“During an election, Council moves into a caretaker period to avoid actions and decisions which could, or could be perceived as intended to influence voters, or otherwise have a significant impact on the incoming Council.”

In the meantime, Council continues to develop concept plans, documentation, financial analysis and cost estimates to inform the community about the operating costs of the proposed project.

“The wording and content of the community survey questions will not be finalised until Council is satisfied that sufficient information has been obtained to create an appropriate survey and the community has been further informed about the proposal.”

To view the draft concept plan for the facility and provide your input, visit www.haveyoursaymountgambier.co... 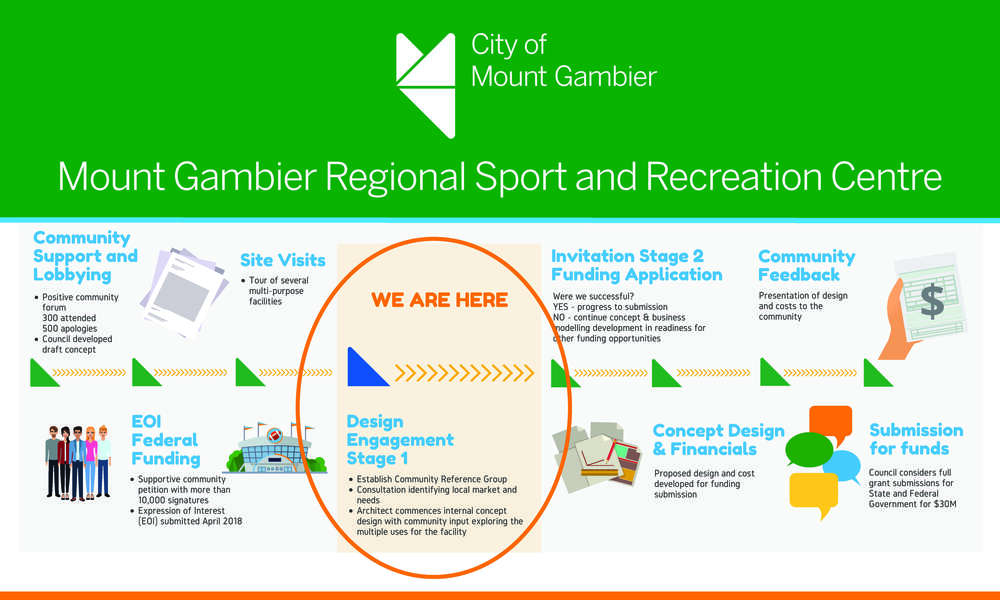