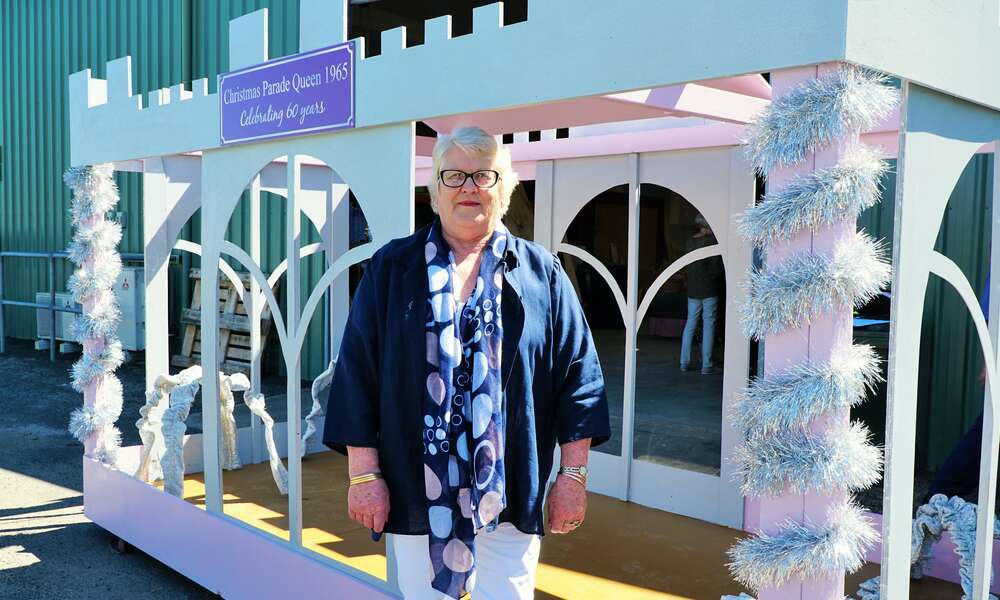 Parade Queen Helen Egan
Helen Egan (nee Mules) was the very first Parade Queen and will participate in the 60 year celebrations in a castle float and queen chair.

Christmas decorations are up in the streets and the finishing touches are being added to the floats as the City prepares for the 2019 NF McDonnell and Sons Mount Gambier Christmas Parade. Commencing at 11:00am this Saturday 16 November 2019 the event will herald the arrival of the festive season for the 60th time since the very first parade was held in Mount Gambier in 1959.

The event will feature 61 entrants, including nine bands and new additions and attractions to celebrate the milestone event.

We are very excited to debut a new float ‘Twas the night before Christmas’ and we also have the return of the very first Christmas Parade Queen.- City of Mount Gambier Team Leader Community Events Denise Richardson

Helen Egan (nee Mules) was the very first Parade Queen and will participate in the 60 year celebrations in a castle float and queen chair that has been constructed by volunteers. The float will be towed by a restored 1964 Massey Ferguson tractor, the same way many floats in the 1960’s were towed.

The Parade Queen concept was introduced in 1965 by the Junior Chamber of Commerce who ran the parade at the time to raise money for charities.

“At the time I was just 18 years old and was awarded a trip to Sydney for raising the most money which was donated to the Derrington Street Special School,” Mrs Egan said.

“I am looking forward to participating in the event - it’s a great event for the city and it will be a laugh, my grandchildren are quite excited too.” 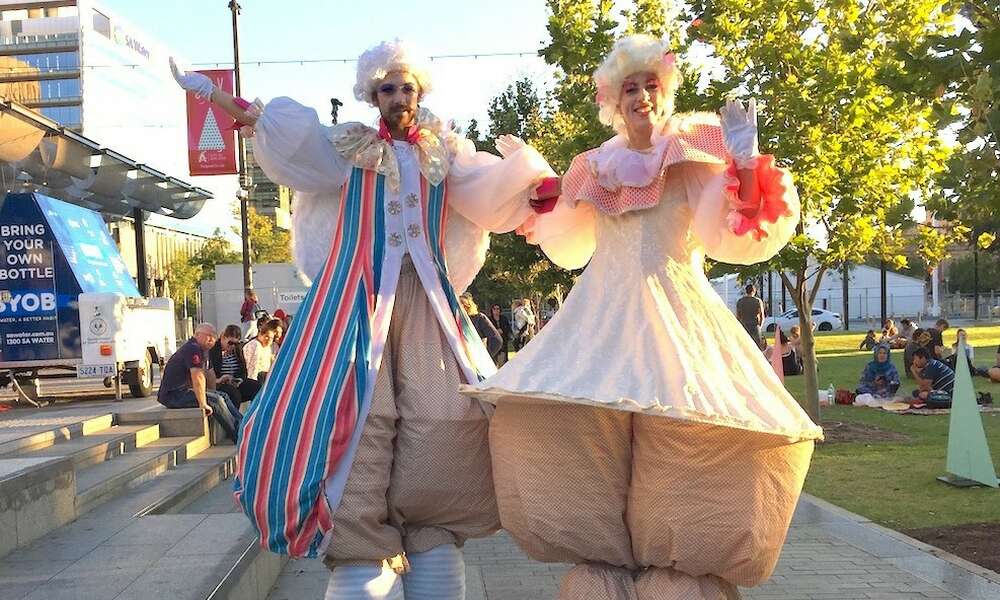 Other attractions for the 60th event include pre parade entertainment with roving performers from Adelaide based circus and street theatre company Slack Taxi. The roving performers will feature along Commercial Street from 10:30am to build the anticipation around the commencement of the parade.

“The performers will include stilt angels, a giant puppet, funky clowns and a comedy magician and will be a colourful visual inclusion, they will also make an appearance at the Party in the Park event at the Cave Garden following the parade,” Mrs Richardson said.

Another inclusion for the 60th event is a slideshow that will be shown on the Elders and Main Corner wall in the Cave Garden from late November to early December with the Mount Gambier History Group working with Council to produce a collection of images from 1959 to 2019.

“The photo collection will show how the parade has evolved from humble beginnings and will reflect the many bands, marching girls and businesses that have taken part over the years, some of which are still involved today,” Mrs Richardson said.

With many thousands of people expected to line the streets for the event, attendees are reminded to honour the blue line at all times during the parade for safety reasons.

The painted blue line runs along both sides of Commercial Street and the cooperation of the public in observing the blue honour line is vital to ensure everyone remains safe.

The community is also urged to comply with all parking requirements and be mindful of road closures in place as thousands are expected to flock to the city centre for the event.

“Please be patient and observe traffic restrictions and road closures to keep children and families safe before, during and after the event.”

Following the Parade the Rotary Club of Mount Gambier West will host ‘Party in the Park’ in the Cave Garden providing various activities for children of all ages.

The Lions Club Blue Lake Brass Band Festival will again be a key feature of the annual event, commencing with a street march at 9:00am in Commercial Street East, followed by the massed march from the Old Town Hall to Crouch Street at 10:15am.

“The Brass Band Festival is another integral element of the parade’s history so were very honoured to continue this great tradition and have the involvement of the bands for this year’s parade,” Mrs Richardson said.

Featuring brass bands from all over the state and Victoria, the Festival continues from 1:00pm with a concert at the Sir Robert Helpmann Theatre. 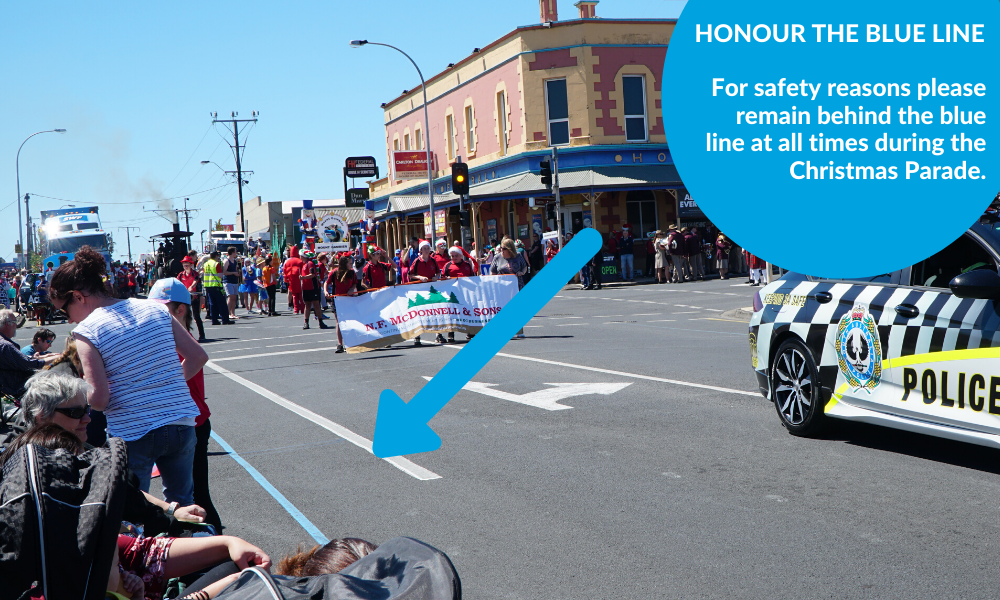 COMMERCIAL STREET EAST between the eastern side of Davison Street and Bay Road/Penola Road, between the hours of 7:00am and 1:00pm. With the exception of the Ferrers Street/Mitchell Street intersection, north/south bound traffic will be permitted to cross Commercial Street East until 8:30am.

The portion of Commercial Street East between Crouch Street and the eastern side of Davison Street may remain open until 10:30am.

COMMERCIAL STREET WEST between Bay Road/Penola Road and Wehl Street, between the hours of 8:30am and 1:00pm.

North/south bound traffic will be permitted to access Commercial Street West intersection until 10:55am.

WATSON TERRACE (north/south leg adjacent to Jens Hotel/Cave Garden) between the hours of 6:30am and 5:00pm.

The following portion of the street will be closed to all vehicular traffic between approximately 7:00am and 1:00pm, as follows:

VICTORIA TERRACE between Park Street and Jubilee Highway West, between the hours of 7:00am to 1:00pm.

The temporary road closure is to allow for the safet exit of float vehicles from Vansittart Park at the completion of the 2019 Christmas Parade.

The parking of vehicles in these streets during the temporary street closures is prohibited.

The following traffic permits are available:

Permit for disabled person’s car park area - holders of disabled person parking permits issued by the Motor Registration Division need not obtain a Council permit but other persons wishing to use the invalid parking area must obtain a permit from Council.

Applications for these permits must be made at the Council Office, Civic Centre, 10 Watson Terrace by 4:30pm on Thursday 14 November 2019.

Vehicles without permits will not be admitted to Commercial Street.