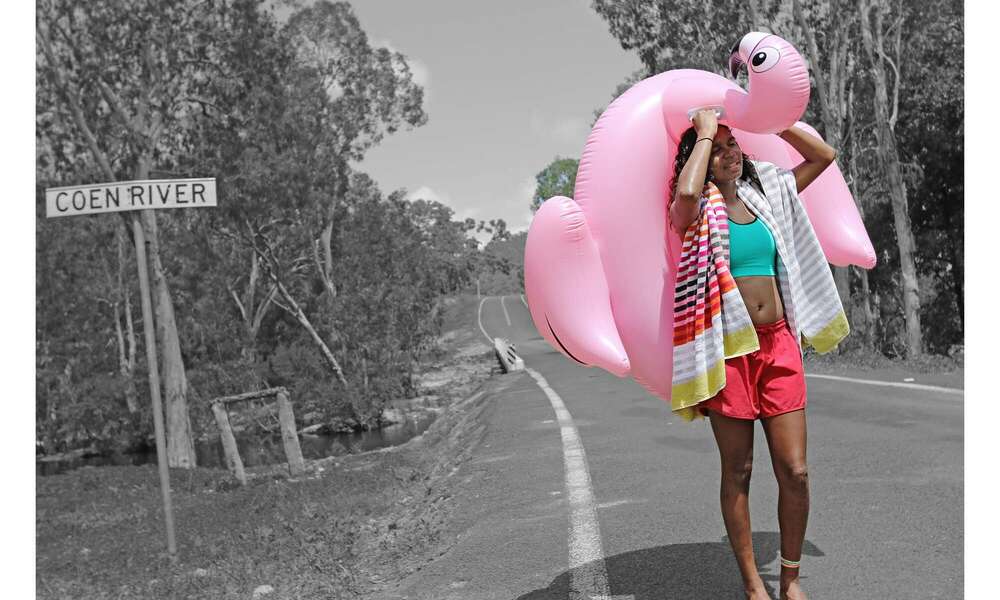 Naomi Hobson is a Southern Kaantju/Umpila woman who lives in Coen, a small town of 360 people in far north Queensland. Inspired by her immediate environment, Hobson’s works express her ongoing connection to Country and her ancestors’ ties and relationships with their traditional lands. She is a multidisciplinary artist who regularly works across painting, ceramics and photography mediums.

In her Adolescent Wonderland series, Hobson works to empower young people, encourage them to be themselves, and celebrate their uniqueness. Through her work, Hobson references her family’s political and social engagements and her engagement with her Country and community. Her photographic series allows the viewer to become part of the community and provides an insight into the vulnerability, playfulness and everyday moments of a generation transitioning from teenagers into adults.

“I think young people are getting crazy adventurous with all the apps and photo settings in their mobile phones. They’re just really connecting with how they want to share their story. Young people are so advanced in using technology, and they also love getting their photos taken, but let them show you their story, their way; that’s what Adolescent Wonderland is all about,” said Naomi Hobson.

Today photography needs to push the boundary… I’m using the medium to tell real stories that I feel don’t get told or haven’t been told. I want people to see who our youth really are: fun, playful, smart, savvy, proud, adventurous and witty. Naomi Hobson

The Riddoch’s Studio Sessions on Sunday 11 December to 15 January will host photography editing workshops for beginners who want to make colour-popping edits to their photos.

Visitors are also invited to participate in a “Where’s Your Wonderland” photography competition, encouraging participants to capture their everyday worlds for a chance to win. The photographs are also displayed digitally as part of the exhibition.

The Adolescent Wonderland series was first commissioned by the Cairns Art Gallery with funding from the Queensland Government through the Arts Queensland Backing Indigenous Arts initiative.