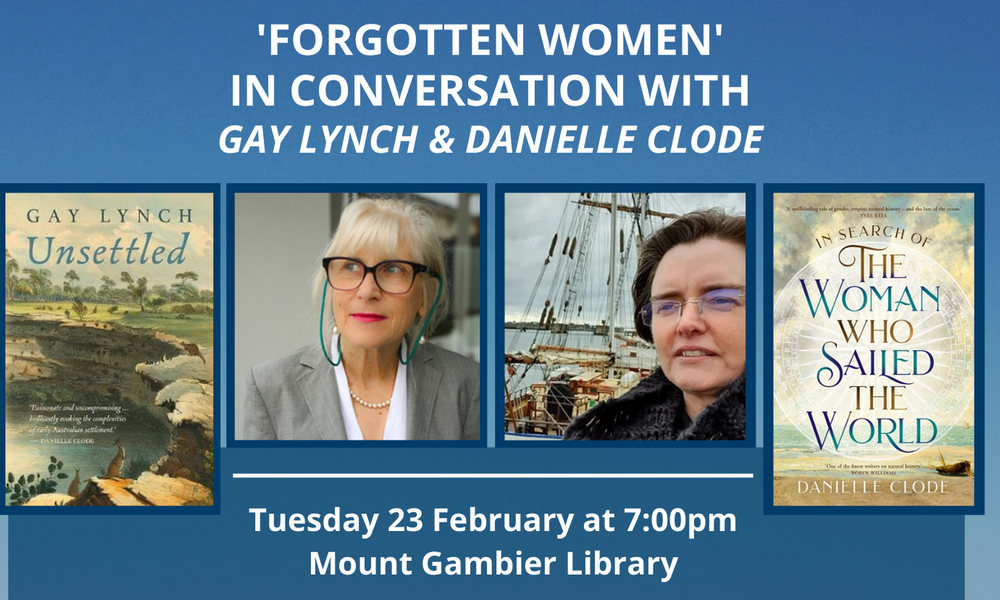 Mount Gambier Library will host an in-conversation event with South Australian authors Gay Lynch and Danielle Clode as they delve into the past and discuss ‘Forgotten Women’ on Thursday 25 March at 7:00pm.

Gay Lynch will promote her book ‘Unsettled’, set in Gambierton (formally Mount Gambier) in the 1800s. The fictionalised story explores Australia’s colonial and settlement history through the eyes of the Lynch family. An exploration of the Irish, the feminine, the local Boandik culture, ‘Unsettled’ also features local characters and events; Adam Lindsay Gordon, Father Julian Tenison-Woods and the wreck of the Admella.

“The accounts of women in history are often unrecorded or erased and their contributions quickly forgotten,” Author Gay Lynch said.

Both Danielle and I have dedicated much of our professional lives re-telling the lost stories of strong women figures and combined, our latest books tell of both the struggles and the achievements of some incredible women.
- Author Gay Lynch

Danielle Clode has a string of best-selling Australian non-fiction books to her name, including the popular ‘The Wasp and the Orchid’ but it is her latest release ‘In Search of the Woman Who Sailed the World’ that has attracted attention from both readers and researchers.

“Jeanne Barret began life as a humble French peasant woman, who overcome insurmountable barriers to become the first woman to circumnavigate the world in the 1770s, making substantial contributions to taxonomic collections along the way,” Ms Clode said.

“Yet Barret’s name is almost entirely unknown. Her signature does not appear on any of the thousands of specimens she collected, for her identity remained a mystery for over two centuries as she disguised herself as a man to embark on the journey”.

The authors will also host free writing workshops on Thursday 25 March with a focus on bringing history to life. Danielle will hold a workshop on non-fiction, from family and local history to biography and memoir from 9:00am to 10:30am while Gay will focus on fiction and how a story changes when we see events through the eyes of different characters from 11:00am to 12:30pm.

Bookings are essential for all events and can be made by phoning Mount Gambier Library 8721 2540 or online www.mountgambier.sa.gov.au/library under ‘Program and Events’.