The longest single glulam timber beams ever shipped to Australia - spanning up to 42 metres, were loaded on to two trucks to make the journey from the wharf in Port Melbourne to the Wulanda Recreation and Convention Centre construction site on Margaret Street in Mount Gambier on Tuesday 22 June 2021. The two trucks will return again on Thursday 24 June 2021 to deliver the final loads of timber.

“Timber is resistant to corrosion in an aquatic environment, has whole of life benefits for health, maintenance and operational costs and aligns closely with the original architectural intent.”

The single large timber spans required for the roof meant the European Spruce product was sourced from overseas as the length was unable to be manufactured in Australia.

“Understanding the nature of the use of the facility, and what it means to the community over a number of generations, our priority was ensuring longevity of the build that would ultimately reduce long-term maintenance costs,” BADGE Senior Construction Manager Mark Wyatt said.

“This particular product was selected as it will not require joins, given its length will span the roof. Those joins are where moisture and chemicals from an aquatic environment can begin to damage structure over years of use, as would any plain timber product,” he said. 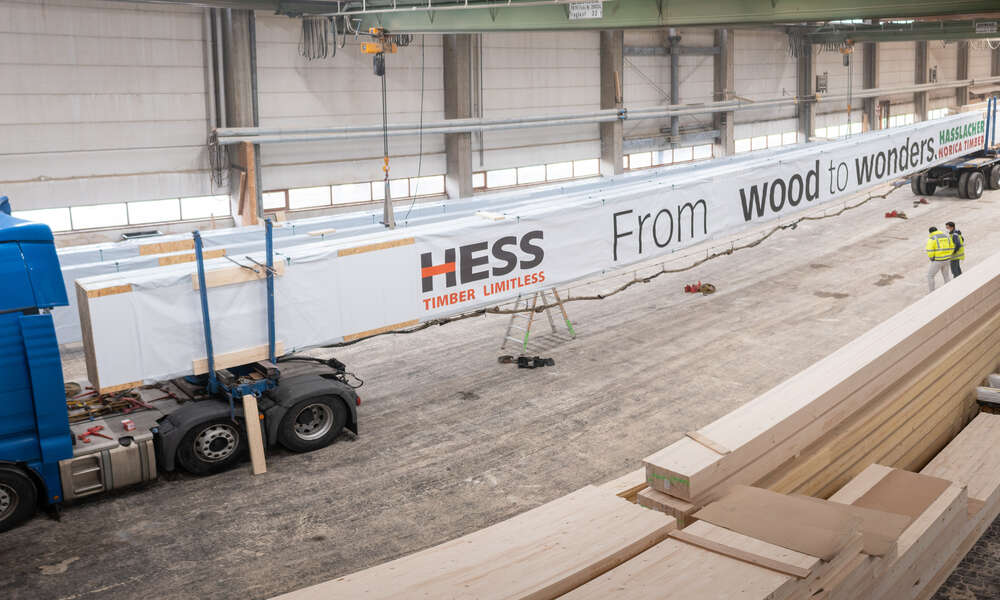 The timber rafters were crafted at HESS TIMBER’s production facility in Kleinheubach, Germany. The beams departed from Zeebrugee Terminal in Belgium at the end of April and travelled approximately 25,000 kilometres via ocean to Australia as break-bulk-cargo, arriving at the wharf in Port Melbourne on Saturday 12 June 2021. 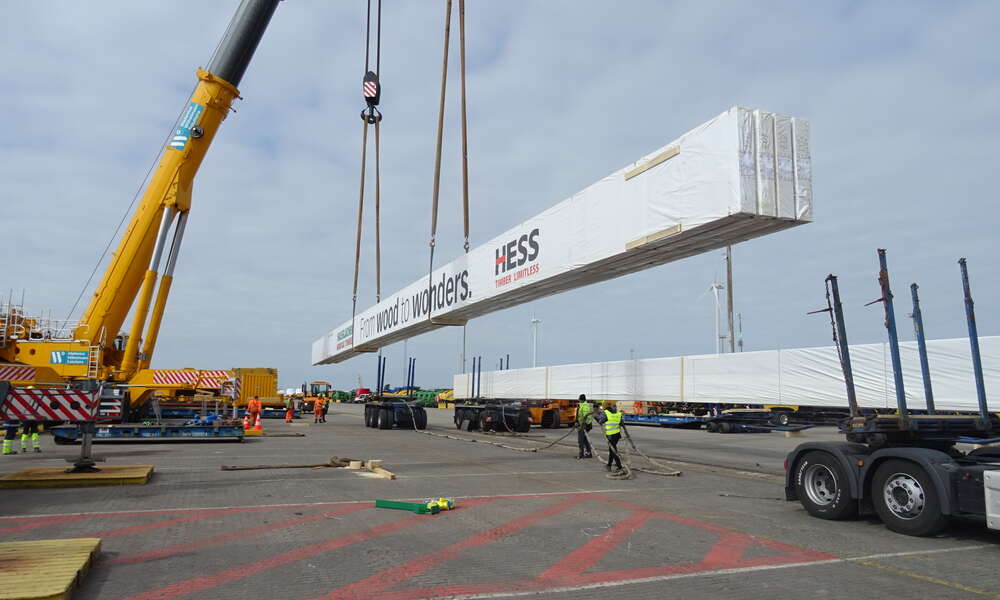 A specialist freight contractor used two mobile hydraulic cranes to unload the beams from the ocean freight platforms and on to each truck which will carry three to four timber beams each over four loads. 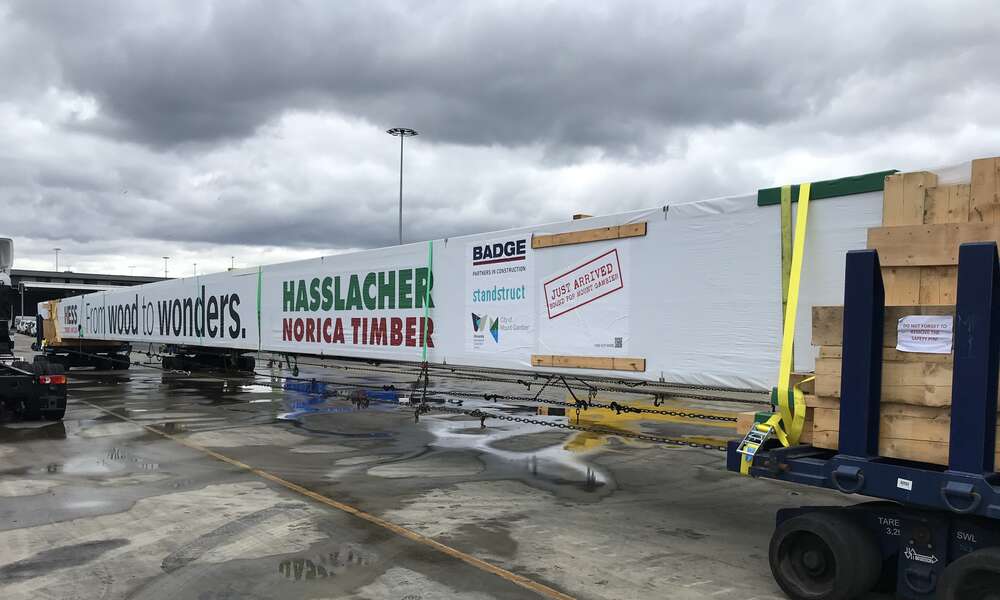 “The truck consists of a prime mover at the front with a separated steerable jinker at the rear. The beams themselves span the void between the two vehicles and act as the trucks middle section,” HESS TIMBER Business Development and Projects Manager Tyson Infanti said.

“There are two multi-purpose boogies (MPBs) that will carry four individual loads to the site. Two trucks will depart as a convoy on Tuesday morning and return to Melbourne to collect the remaining beams to be delivered to site in Mount Gambier on Thursday.”

The long and oversized loads will measure 2.5 metres wide and 49 metres in length. Three certified pilots will be required to escort the loads through Victoria to South Australia.

The trucks will travel under police escort and will follow a pre-approved traffic management plan.

“To give you an idea of the spectacle to come as they make the trip from interstate, the timber beams are longer than the average wind turbine blade if you’ve ever seen them in transit,” Ms Cernovskis said.

The travel route from Port Melbourne to Olympic Park in Mount Gambier:

“For safety reasons, we ask that people stay away from the building site compound as the timber beams arrive as it will be a slow and complex entry to site for the load-carrying vehicles,” Mr Wyatt said.

The beams will be stored in the vicinity of the 50 metre pool until they are ready to be installed.

Learn more about the timber used for the Wulanda Recreation and Convention Centre with DesignInc Architect Ben Luppino and HESS TIMBER’s Tyson Infanti on the Timber Talks podcast: https://timbertalks.libsyn.com...

About the Wulanda Recreation and Convention Centre project

The Wulanda Recreation and Convention Centre is a multi-purpose facility designed to be a community space with facilities and activities for all ages and abilities including children, families, youth, community groups, recreational and organised sports and those with special needs.

The centre is being built at Olympic Park on Margaret Street, Mount Gambier and will provide substantial year round indoor facilities, addressing many community needs both now and for future generations to come.

The new facility is expected to be completed in Autumn 2022.