Umpherston nominated for 7 wonders of Australia 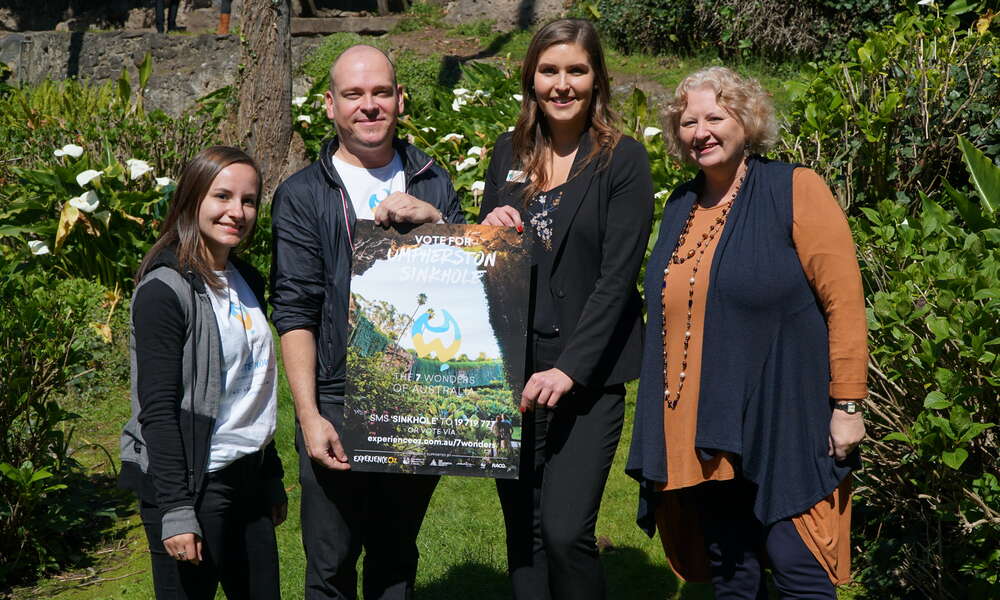 Mount Gambier’s Umpherston Sinkhole is among six iconic South Australian sites nominated in a nation-wide voting initiative to determine the ‘7 Wonders of Australia’, with tens of thousands of Aussies expected to vote in what is set to be Australia’s largest-ever online travel poll.

While numerous lists and rankings for Australia’s most iconic sites have been made by individuals in the past, an Australian travel company is turning to crowd sourcing of the Australian public to vote as a nation to determine what our country’s greatest wonders are.

Led by the country’s largest online marketplace for travel experiences, Experience Oz, the ‘7 Wonders of Australia’ campaign asks Australians of voting age to select from a shortlist of 50 iconic Australian natural sites, landmarks and architectural icons submitted by state and regional tourism organisations from across the country.

In what will be the first domestic campaign of its kind and anticipated to be the largest in the country, the poll which has already received over 55,000 votes, aims to reinforce Australia’s majestic sites as some of the best on the planet, encourage domestic travellers to explore the best of their backyard, and highlight conservation and environmental issues in a bid to encourage people to contribute to help preserve them.

Over the past two months, Aussies have had the opportunity to make history and vote for the ‘7 Wonders of Australia’, with nominees including the Blue Mountains, the Great Barrier Reef, Port Arthur Historic Site, Wave Rock, Fraser Island, Sydney Opera House, Uluru, the Shrine of Remembrance and more. Public voting closes next month, on October 7.

We are very excited to see Umpherston Sinkhole nominated in the national search for the ‘7 Wonders of Australia’. Umpherston Sinkhole is an incredibly unique site that brings together nature, wildlife, geology & history all together into a single experience.
- Tourism and Economic Development Manager for the City of Mount Gambier Donna Foster.

“Located in the city of Mount Gambier, Umpherston Sinkhole is one of many geological wonders from the Mount Gambier region. Our geological make-up is truly unique and something everyone should experience for themselves.

“The 7 Wonders of Australia concept really encourages Australians to explore their own ‘backyard’, with so many diverse destinations to explore.”

With a number of nationwide and international organisations collaborating on the campaign in a quest to promote the ‘7 Wonders of the Australia’ and also engage conservation efforts, the once-off campaign is receiving significant support.

Once public voting closes in October, a shortlist of 20 Finalists from the top-voted nominees will be vetted by a reputable and expert panel of judges from throughout Australia’s tourism, conservation and non-for-profit sectors, who will deliberate and officially announce the ‘7 Wonders of Australia’ to the world.

Experience Oz Marketing Manager Matt Hobbs said the campaign was designed to provide the fairest possible perspective on such a list of sites, while also shedding light on the importance of domestic travel and conservation of our wonders.

“People have been making lists of the top icons of Australia for years, but they have always come from the - often biased - perspective of one writer. We now live in the age of crowdsourcing and, given we work with thousands of tourism experience businesses across the country and collaborate with tourism organisations in each state, our distribution network allows us to get a massive sample size of Aussies’ opinions,” Mr Hobbs said.

“We’re asking people to weigh in based on a number of criteria such as desirability as a travel spot, natural and historic value, beauty and a number of other factors that make Australia’s sites and their experiences so amazing.

“We are thrilled to see six iconic sites from South Australia be nominated as contenders for the ‘7 Wonders of Australia’. From Wilpena Pound to Lake Gairdner, through to the Umpherston Sinkhole and Flinders Chase National Park, it’s safe to say Aussies have some tough decisions to make, so we encourage everyone to get involved in championing what they believe are the greatest wonders.”

The wonders will be selected based on a comprehensive criterion, which considers the level of recognition, natural, architectural or cultural value, desirability and aspiration, rarity and uniqueness and tourism value of the wonder.

With threats to animal habitats, to environmental issues, to the impacts of fires and weather effects taking a toll on the greatest Wonder nominees, conservation will remain a big focus for the campaign. Experience Oz has partnered with a host of reputable organisations in an effort to drive donations and conservation efforts.

Foundation for National Parks & Wildlife CEO Ian Derbyshire said conservation efforts are an integral part of the campaign’s efforts and he is thrilled to be involved.

“We are very pleased to be working alongside the tourism industry and have the opportunity to watch the country vote for the 7 Wonders of Australia. We are passionate about our country and keeping our wonders wonderful, while safeguarding wilderness and wildlife for future generations,” he said.

“Australia has lost 75% of its rainforest and nearly 50% of all forests in the last 200 years, and without a lasting form of protection, habitat can be degraded or destroyed; campaigns such as ‘7 Wonders of Australia’ are vital in terms of raising awareness and shedding light on our beautiful country and the need to protect it, so we encourage everyone to get involved.”

Public voting is now open and closes Sunday 7 October 2018, before the top 20 most-voted nominees are deliberated on by a panel of experts that will announce the top 7 Wonders of Australia in November 2018. Voters must be Australian residents of voting age.

Participants in the poll will have the opportunity to win one of seven complimentary prize packages to visit the 7 Wonders of Australia in person.

For media information, please contact Giulia Badalotti at Puzzle PR at giulia@puzzlepr.com.au or +614 048 444 494.