Elected Members on site at Wulanda
City of Mount Gambier Councillors Frank Morello, Sonya Mezinec, Paul Jenner and Mayor Lynette Martin toured the Wulanda Recreation and Convention Centre development site in recent weeks. They are standing at the side of the building closest to O’Halloran Terrace.

The Wulanda Recreation and Convention Centre project continues to progress at Olympic Park in Mount Gambier despite ongoing delays caused by COVID-19 restrictions.

Head contractor BADGE Constructions is managing 100 to 110 people from various trades and services working on site each day to progress the major build.

“It’s great that we can involve our local skilled services in this transformational project which will provide the facilities to really change the way we live and interact with each other recreationally in the city when it opens later this year.”

The external 50 metre pool structure is being rebuilt and the internal pools including the 25 metre pool, program pool, learn to swim pool and the splash pad are currently under construction within the centre.

“The 50 metre pool is now a rebuilt shell and BADGE is currently concreting the ramps and steps. The existing pool base is being cleaned and ready for wet deck installation and tiling. Myrtha will then complete the wall panels and liners.” 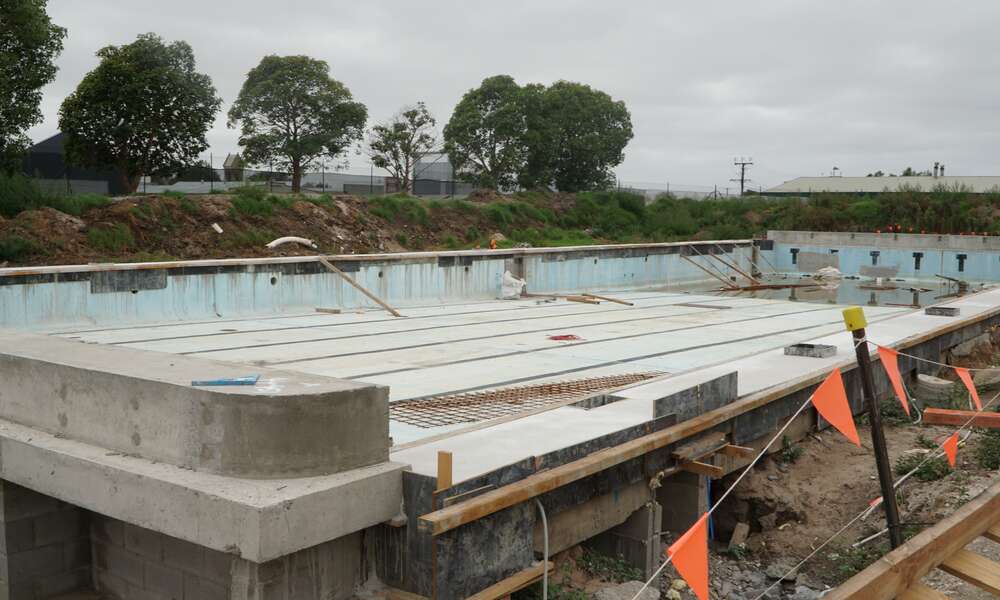 “Inside the pool hall, the pool frames and shells are now built and the process of concreting the seating, ramps and steps has begun. Once this is complete, wet decks will be installed and tiling will commence, then Myrtha will complete the liners.” 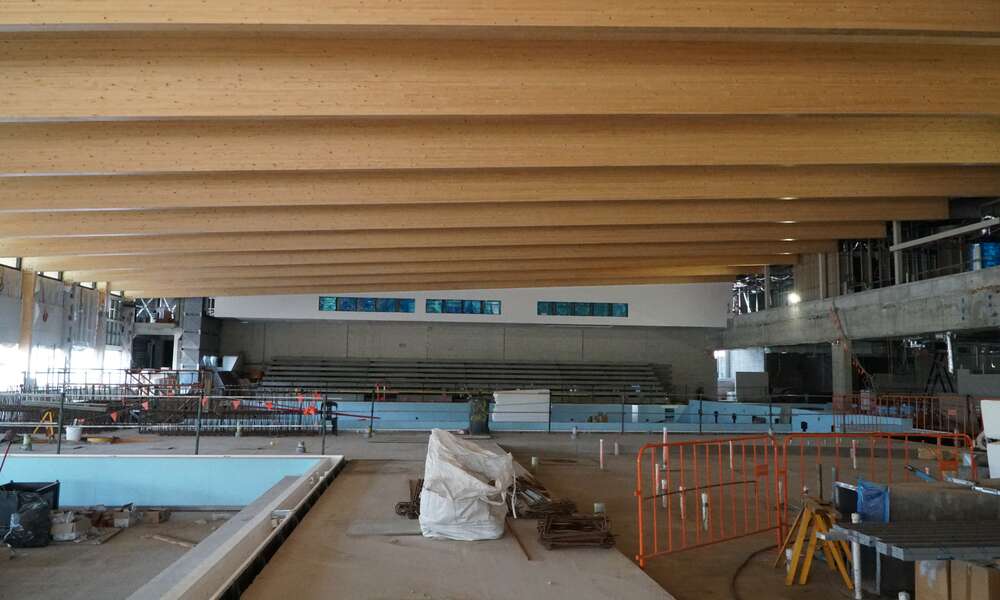 Pool hall construction
Myrtha pools are being installed inside the pool hall at the Wulanda Recreation and Convention Centre. 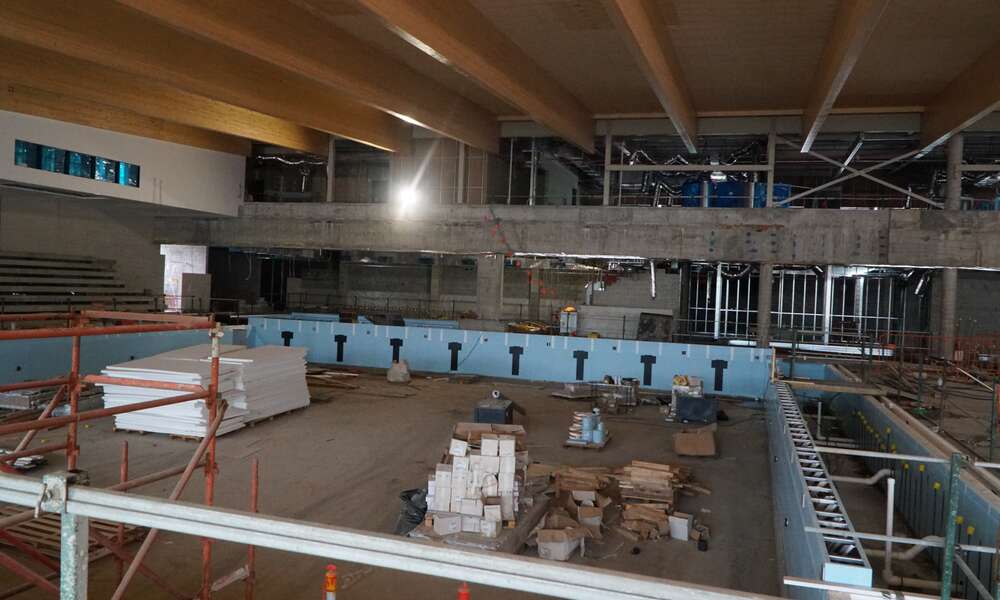 The building continues to take shape in the other internal spaces with wall framing works, wall and ceiling sheeting, painting, wall and floor tiling, aluminium windows and doors and joinery installation. 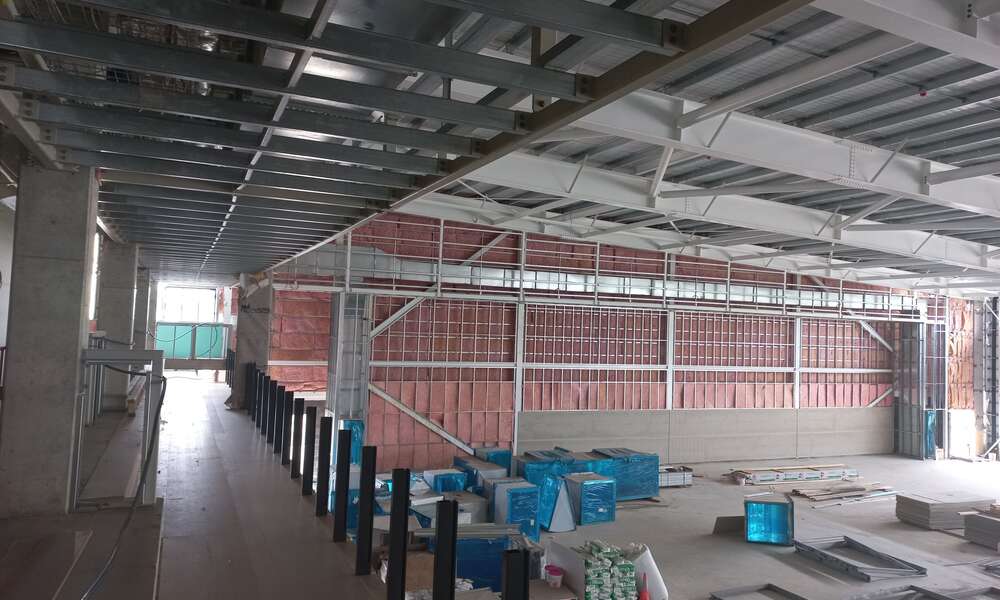 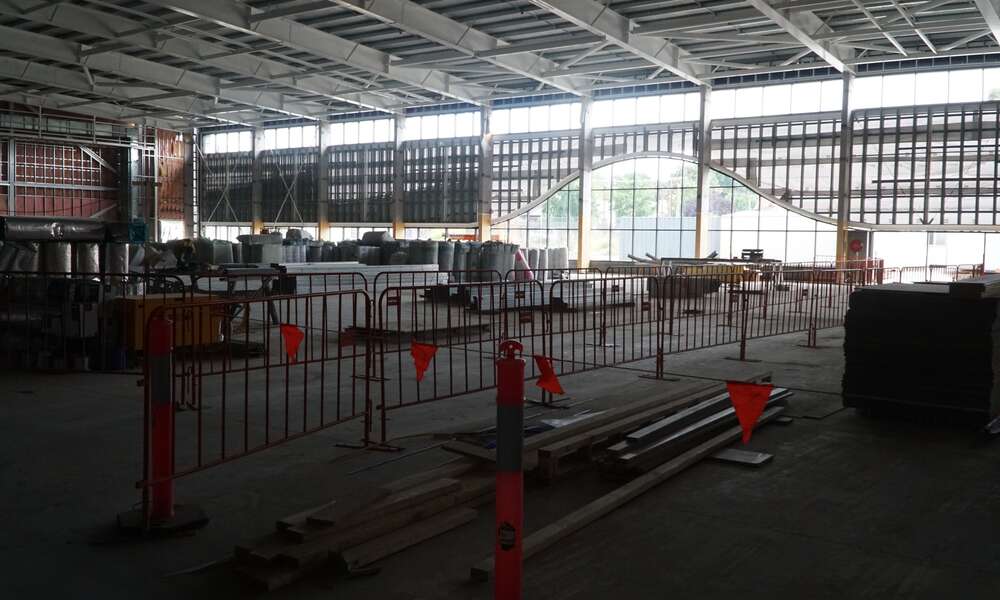 “The expansive courts area is beginning to look quite striking with work on ceiling framing and featured lining, tiered seating and internal aluminium windows and doors.” 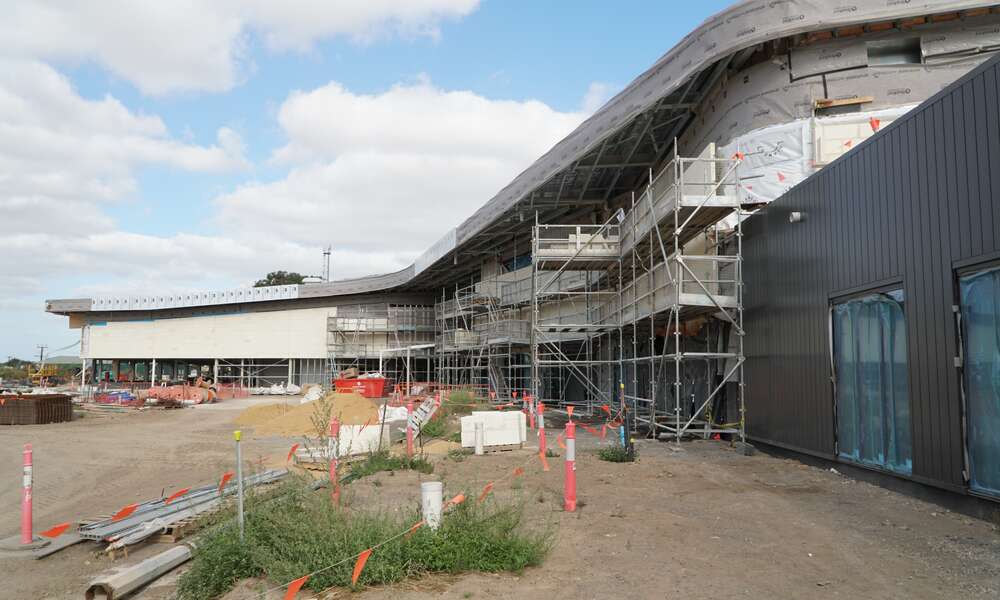 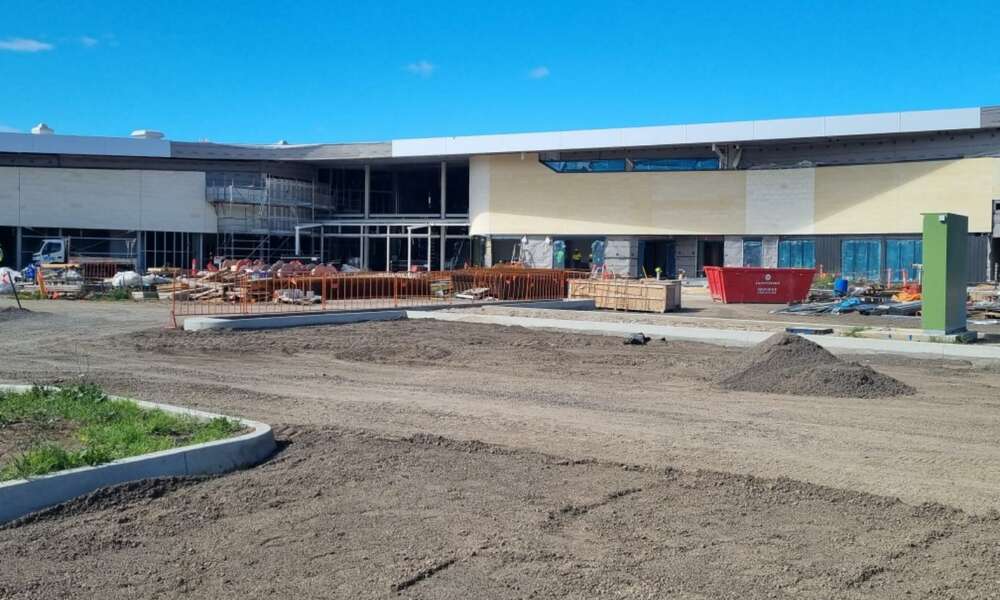 Wulanda exterior from front entrance
View of the entry to the building from the Margaret Street car park. 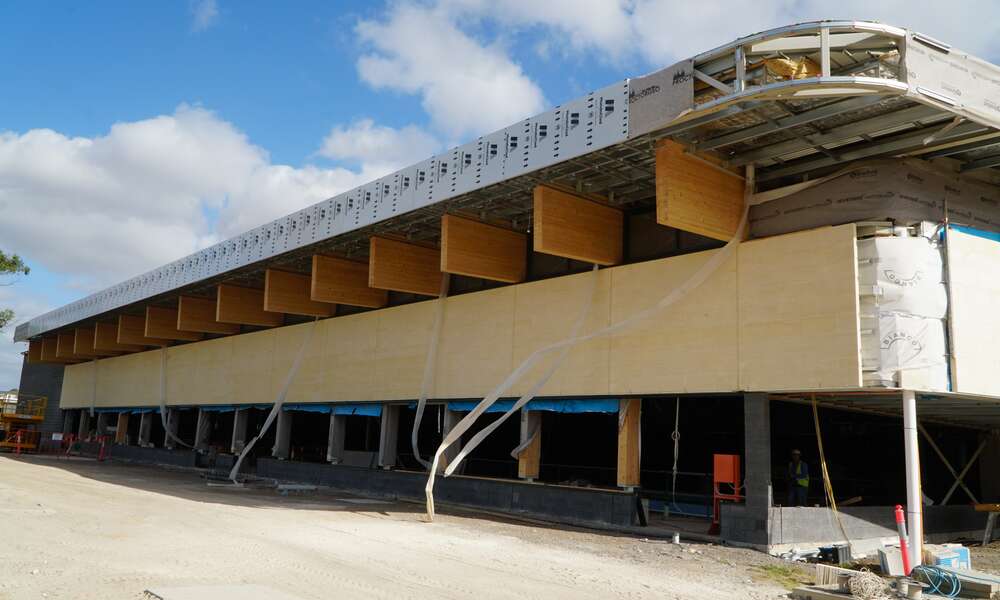 Timber and limestone
Timber, glazing, limestone and cladding feature on the external façade of the Wulanda Recreation and Convention Centre.

“The outside of the building is really attracting the attention of those who drive by the site for a look. The cladding, limestone and glazing work beautifully together and it’s going to look fantastic when it’s all finished,” Ms Cernovskis said.

“The centre is expected to reach lock up stage by early April at this point.” 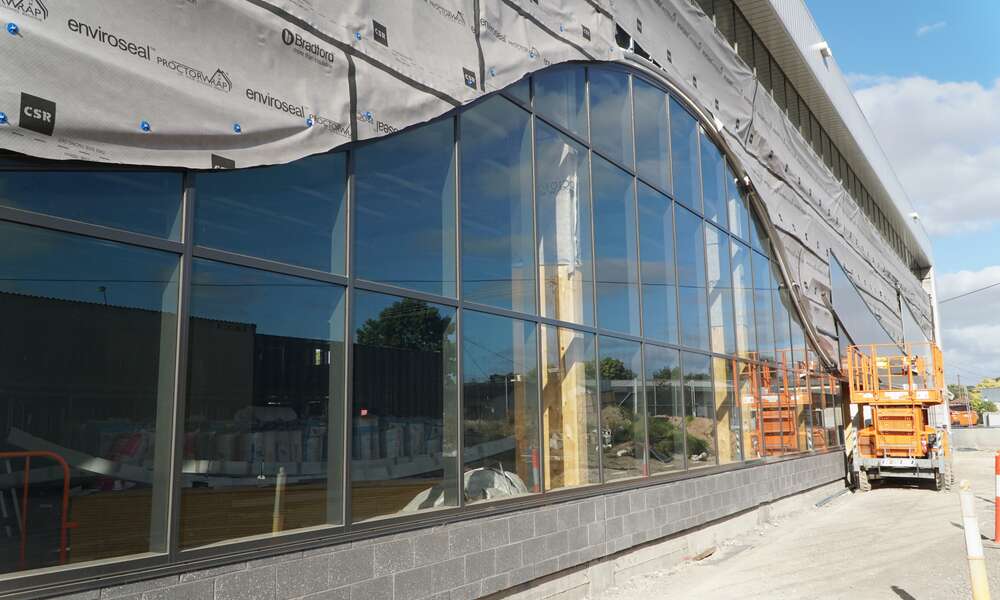 Glazing
The installation of windows is transforming the look and feel of the Wulanda Recreation and Convention Centre as the facility nears lock up stage.

About 1600 solar panels are being installed across the entire roof of the Wulanda Recreation and Convention Centre this week. The panels are expected to generate 700 kilowatts of power per day.

“The system is powerful enough to ensure that the centre is self-sufficient when it comes to solar power generation,” Ms Cernovskis said. 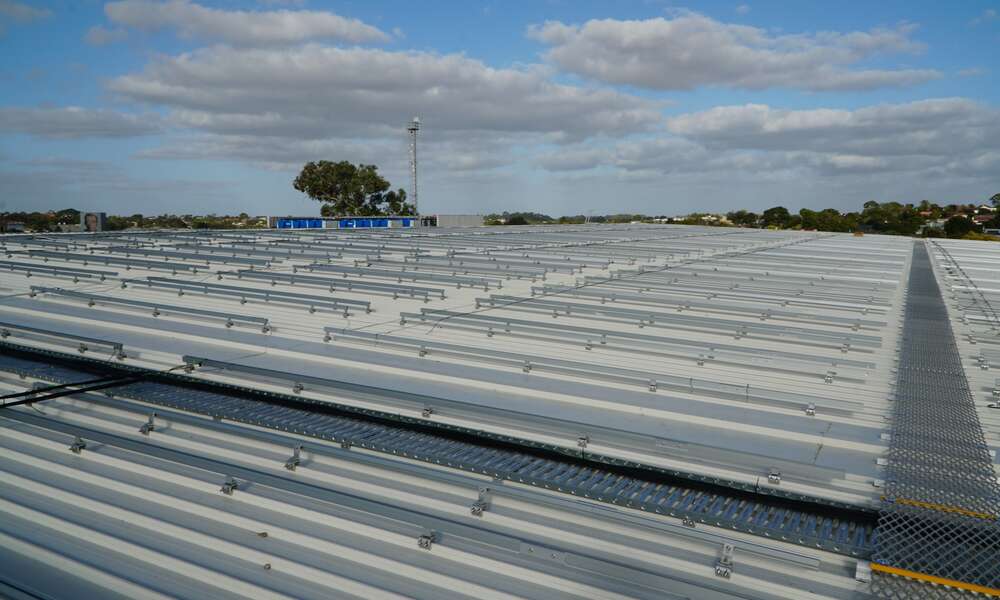 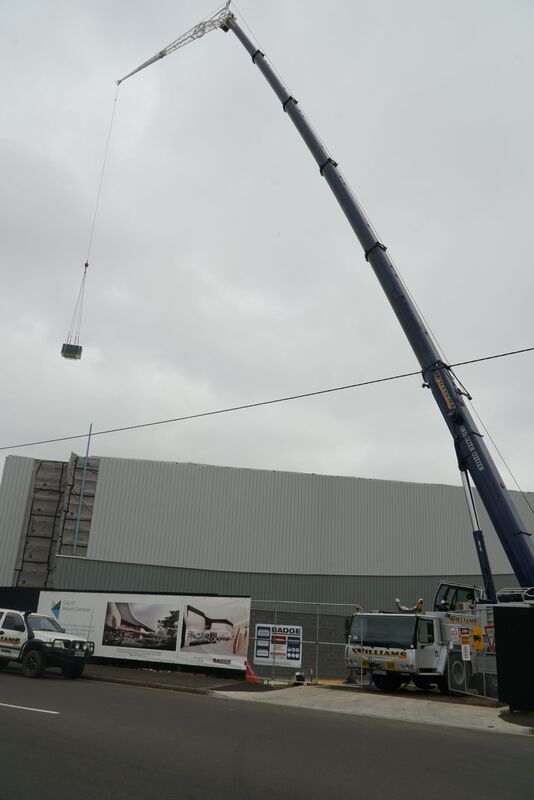 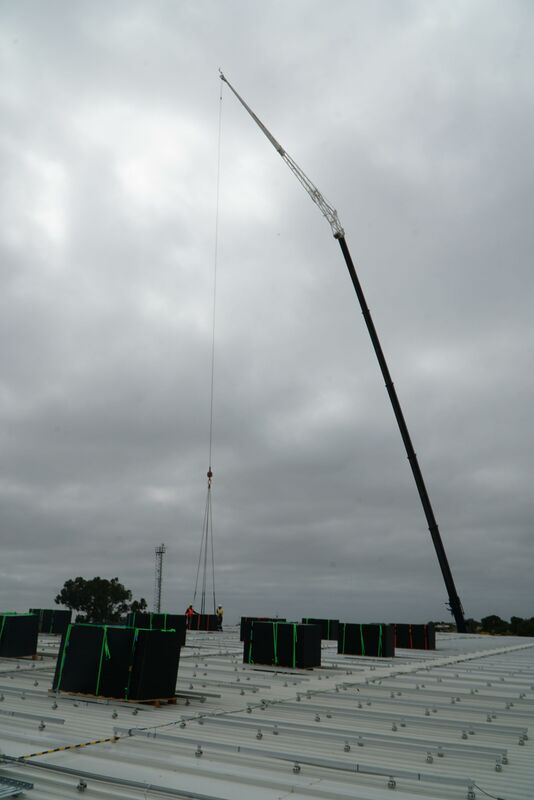 Solar panels - Crane 2
Solar panels were craned onto the roof at the Wulanda Recreation and Convention Centre site this week. 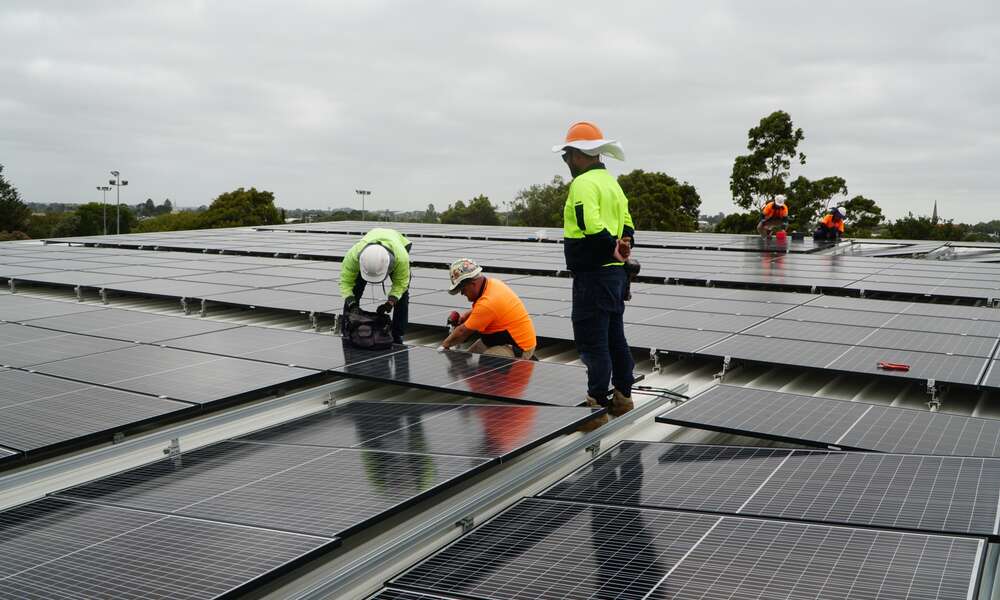 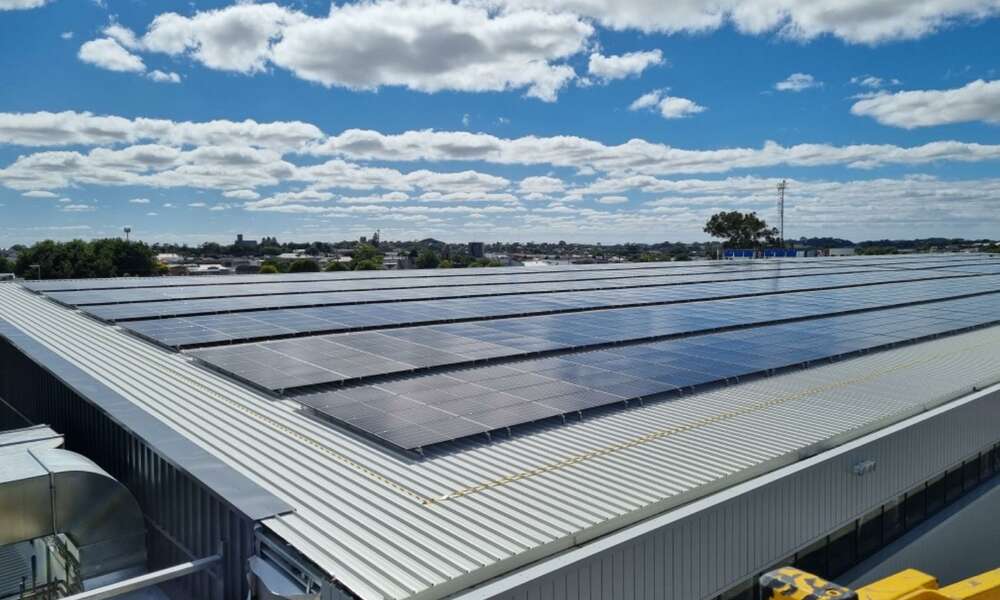 Solar panels installed on Wulanda roof
After: The Wulanda Recreation and Convention Centre roof following the installation of solar panels. 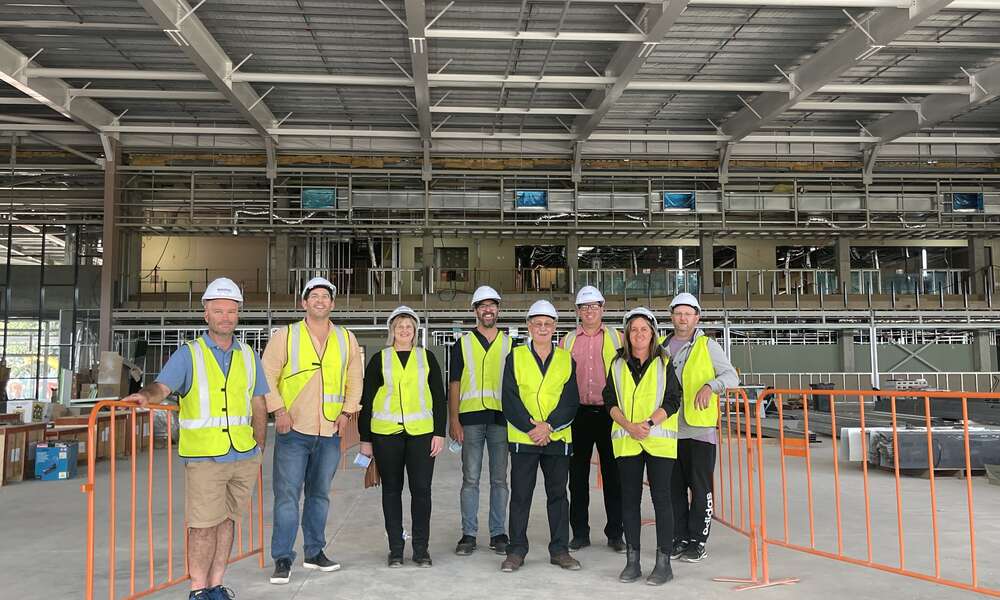 COVID-19 is impacting the program of works and hindering the procurement of goods. The schedule is being amended and tasks prioritised to address any delays and challenges as they arise.

“As we’ve mentioned previously, it is challenging building in a COVID-19 environment. COVID is affecting about 20% of the workforce on a daily basis. It’s predominantly close contact isolation that is having the biggest impact and then actual COVID positive isolation cases.”

In the coming months work will continue on external cladding, internal wall and floor finishes and the surrounding car park areas.

At this point in time we are not able to indicate when the centre will open. We hope to have a better understanding of a firm date in the coming months and we’ll let the community know as soon as we can. - City of Mount Gambier Project Sponsor Barbara Cernovskis

“We can’t wait for you to see and experience the centre for yourself and while delays can be frustrating, it will certainly be worth the wait."

Council is in the final stages of negotiating a partnership model contract with an operator for the centre.

“The contract is expected to be executed soon and follows an extensive tender process. Details about the operating model and entry fees will be determined once we announce the operator of the facility.”

About the Wulanda Recreation and Convention Centre project

The Wulanda Recreation and Convention Centre is a multi-purpose facility designed to be a community space with facilities and activities for all ages and abilities including children, families, youth, community groups, recreational and organised sports and those with special needs.

The centre is being built at Olympic Park on Margaret Street, Mount Gambier and will provide substantial year round indoor facilities, addressing many community needs both now and for future generations to come.

This modern facility is designed to be a community hub with a multi-purpose design to complement existing facilities and become a focal point for Mount Gambier’s recreation, community activities and functions.

View the time lapse video of the construction process during February 2022: